By Maral Zhantaykyzy in Nation on 20 February 2013

ASTANA – One of the priorities of state policy in Kazakhstan is the right of every child to live and grow up in a family. 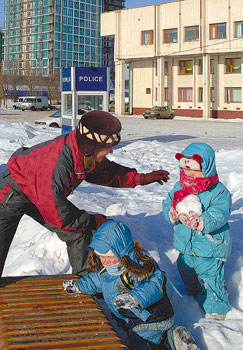 Accession to the convention will allow authorities to monitor a child and ensure he or she is treated properly.

Raissa Sher, Chairwoman of the Children’s Rights Protection Committee of the Ministry of Education and Science, recently held a briefing where she spoke about the implementation of the National Strategy of Adoption and the innovations in national legislation on children’s rights.

International (also known as intercountry) adoption has been permitted in Kazakhstan since 1999. Over 14 years, more than 8,000 orphans have found new families outside their home country. Under the laws of Kazakhstan, all of them remain citizens and are eligible for Kazakhstan passports. At age 18, the child can choose a citizenship. Today, Kazakhstan has 10,887 orphans and abandoned children who live in children’s homes, hoping one day to have a family.

In 2010, the government of Kazakhstan introduced a moratorium on international adoption. It was adopted because the previous unregulated and chaotic process of adoption had spawned many abuses and made it impossible to trace the fate of the child.

That same year, Kazakhstan ratified the Hague Convention on the Protection of Children and Cooperation in Respect of Intercountry Adoption. The government carried out the necessary work on the foreign adoption process in accordance with international standards and regulations.

Accession to the convention will allow authorities to monitor a child and ensure he or she will not be treated cruelly. Today, if any case of such mistreatment is revealed, children can be returned to their homeland, Kazakhstan.

The adoptive parents are now required to report about the fate of the children. In late 2011, President Nursultan Nazarbayev signed into law a new code “On Marriage (Matrimony) and the Family.” In March 2012, the government passed six regulations to be added to the code.

The main innovation is the creation of regional interagency committees to select children for international adoption and to approve candidates for adoptive parents.

Under the new rules, all documents provided by foreign adoptive parents will be collected by accredited agencies abroad and then transmitted through their branches in Kazakhstan to the Children’s Rights Protection Committee.

The accreditation process for adoption agencies was carried out over the last year and was completed on Jan. 18, 2013. About 60 agencies have submitted their proposals. The commission has approved the accreditation of 37 of them. Another 20 adoption agencies have already completed the registration process. These include eight agencies from the United States, five from Spain, three from Canada, one from Germany and one from France. Every agency will be allowed to find adoptive parents for only two children.

“Today, adoption agencies accredited in Kazakhstan undertake the control of adopted children in foreign countries and the responsibility of providing timely reports about them. During the first three years, these reports will be required twice a year. In the following years, they will be required once a year until adulthood. If the accredited agency violates the requirements of Kazakhstan’s law to any extent, the accreditation will be recalled,” Sher said.

The international adoption of children from Kazakhstan is permitted only to countries that share Kazakhstan’s international obligations to protect the children’s rights and interests (paragraph 5 of article 84 of the code).

The terms of selection of adoptive parents for their children have been changed. The list of persons who cannot be adoptive parents (single men, people with no fixed abode, stateless persons, and others) was extended. The period of communication of future custodial parents with their child has been increased from two to four weeks. In addition, the age difference between the adopter and the adopted child must be at least 16 years and not more than 45 years.

After the child meets and communicates with his or her prospective parents, the interagency commission will decide whether candidates correspond to the child’s interests. If approved, the adoptive parents must be listed in the consular register in the Department of Consular Service of the Ministry of Foreign Affairs. Upon arrival in their own country, they are obliged to register the child at the embassy consulate of Kazakhstan accredited to their country.

Kazakhstan’s Ministry of Education and Science and its Foreign Ministry, represented by diplomatic missions and law enforcement agencies, are charged with controlling the execution of this process.

As The Astana Times reported in its article about the Mercy Voluntary Society on July 27, 2012, a new webpage called www.usynovite.kz was launched. The page provides collected resumes of all children living in Kazakhstan’s orphanages, including detailed information for those who want to adopt a child in Kazakhstan.