By Maral Zhantaykyzy in Culture on 20 February 2013

ASTANA – Famous Hollywood director Chuck Russell who made the hugely popular films “The Mask,” “Eraser” and “The Scorpion King” will make the joint Kazakh-Russian film “Politsioner” (a tongue-in-cheek mix of “Policeman” and “Militsioner” (Militia men in Russia). 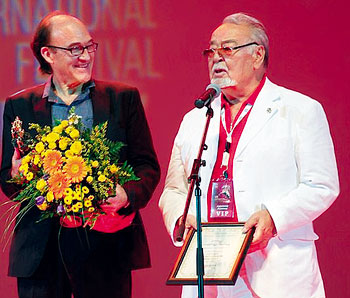 In 2001, Russell first visited Astana to take part in the Eurasian Film Festival.

The film will be a comedy thriller with a $10 million budget, produced with the financial support of the World Cinema Fund. Its producers are Pierre Spengler, who made the first three and most successful “Superman” movies, Yegor Konchalovsky, Alexandra Lee and Ernar Kurmashov.

The film tells the story of two police officers, Harper and Ivan, who live on the opposite sides of the world. But fate and duty bring them together to fight the Russian mafia. Ivan goes undercover in the Russian mafia gang that controls the illegal pharmaceutical business in the United States. The group plans to contaminate Harper’s hometown with a deadly virus.

The movie will be filmed in the United States, Kazakhstan and Russia. Russell has proposed Steve Guttenberg, the star of “Police Academy,” for the role of Harper. Now he is looking for a Russian actor to play Ivan.

Russell is also making another Kazak-American film called “Arabian Nights.” It is a new adaptation of the famous book “A Thousand and One Nights.”

The KazakhFilm studio is producing the film in partnership with Inferno, a leading Hollywood film company. Among its other productions, Inferno has made “Hachiko” (2009) and “Professionals” (2011). The Film District Company acquired the U.S. rights to present the film at the Cannes Film Festival.

“Arabian Nights” tells the story of a young commander, played by Liam Hemsworth of “The Hunger Games.”After the death of a king, he joins forces with Sinbad, Aladdin and the genie of Aladdin’s lamp to rescue Scheherazade and her kingdom from dark powers. Anthony Hopkins will play the villain Pharotu, who killed the king.

“Arabian Nights” has a budget of$70 million and most of it is filmed in Kazakhstan. The country was chosen primarily because of its desert regions, where most of the action will take place. Sets include a full-scale medieval city 120 miles from Almaty that was built a few years ago for Russian director Sergey Bodrov’s “Nomad.” Other locations include the sandy hills and gullies at the Altyn Emel National Park near Almaty.

“When I saw such a huge variety of nationalities and traditions existing in one country, I realized that anything is possible. Even on my first day here in Kazakhstan, I met a troupe of actors performing some incredible tricks while riding horses. It amazed me!” Russell said. 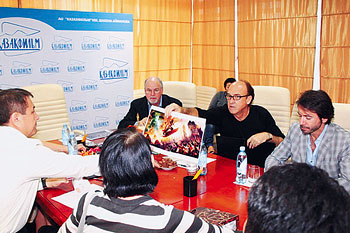 Hollywood director signed a contract with KazakhFilm to shoot “Arabian Nights” in Kazakhstan.

“Ancient traditions are still alive in Kazakhstan,” the American director said. “They coexist with the making of a contemporary movie.”

“In my opinion, it is very worthwhile to produce movies in Kazakhstan, thanks to your spectacular scenery, hospitable people and rich cultural traditions of music and dance which I want to show to my Western colleagues. Kazakhstan has everything,” he said.

Russell first visited Kazakhstan in 2011, when he took part in the Eurasia Festival. He was awarded the main film festival award for his contribution to world cinema.

“More than a decade ago I made ‘The Mask.’ Now I want to make a film that is understood all over the world. The manuscript of ‘A Thousand and One Nights’ which is the basis for this film was found in the ninth century and represents a collection of myths and legends of North Africa, the Middle East and China. My grandmother read me those stories when I was a child,” Russell told reporters in Almaty after signing a co-operation agreement with KazakhFilm.

“For a director, nothing is more pleasant than to discover new talents,” he said. “What is happening now in Kazakhstan, China and India demonstrates the rapid growth of young cinema and their rise to world standards. The Kazakhstan cinema today is like Hollywood studios in the 1950s and 1960s, when they were discovering new faces and supporting young, novice directors.”

Kazakhstan’s President Nursultan Nazarbayev has made supporting the national filmmaking industry a priority goal. His backing over the past two years has sparked a major investment programme in Kazakhstan film-making and has helped to revive the domestic film industry.

“The domestic film industry of Kazakhstan has the capacity to make 100 films a year including 20 films of the high standard required for movie theatre distribution,” the president said when he issued the annual presidential and state grants for literature and art at his Almaty residence in January.“Hundreds of movies can be produced, but we need those to be of high quality.”

“We know that the quality of our movies has been confirmed by audiences in 48 countries. The importance of cinema in the education of patriotism is very great,” the president said. “We will continue to support KazakhFilm and we will look critically at the quality of the product.”