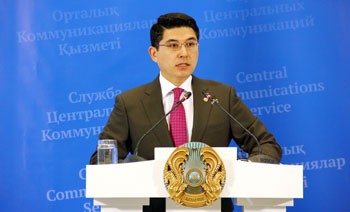 ASTANA, January 28 – It’s Monday and journalists from Kazakhstan’s TV stations and major newspapers arrive at Astana’s smart new state-of-the-art Media Centre. They are joined, through live video link, by reporters from across the country.

They come every week to hear Altay Abibullayev, the Official Spokesman of the new Central Communication Service. It is a new style of briefing which is helping improve the flow of up-to-date information to the media and the country’s citizens.

More than 50 journalists pack into the room. TV camera crews move around filming from different angles. The CCS spokesman starts by setting out the main activities for the next seven days from across the government.

This can include presidential trips abroad, the visits of foreign leaders to Kazakhstan, major announcements from Parliament, ministries and agencies as well as international events in which Kazakhstan is involved. He then answers questions on a wide range of topics.

Each week the briefing also provides an opportunity for senior representatives from a different Government ministry or department to talk in detail with the media – and through them the public – about their work.

Today the Official Spokesman hands over to Bakytzhan Zhumagulov, the Minister of Education and Science.

Previous briefings have provided a chance for the vice-minister of healthcare, Eric Baizhunusov, to use compelling statistics to show how care and treatment is improving in Kazakhstan and for the Agency for the Regulation of Natural Monopolies to explain recent price rises for energy and rail fares. The journalists learnt that the extra revenue raised would be used, for example, to buy new rail carriages to improve comfort for passengers.

Altay Abibullayev asks if there are any more questions and closes the briefing. It has lasted an hour and has been broadcast live on the web. The camera crews quickly pack up while reporters use their laptops to write up their stories.

These briefings have only been taking place since November. But they are already figuring prominently on the main TV news bulletins each Monday and helping set the news agenda for the week. Foreign journalists based in Astana are also beginning to attend.

Abibullayev, who brings extensive experience of media relations to his role as Official Spokesman, is a former Official Spokesman for Kazakhstan’s Ministry of Foreign Affairs. He said: “The briefings are new but they have quickly become a major event. Journalists now understand that they can learn what is happening right across Government from them. Ministries and other agencies recognise that it is an easy way of alerting the media to their activities. It is helping everyone and means that people across the country have a better idea of what the Government is doing and why.”

The weekly briefings are the most visible sign of the new approach of the Central Communication Service which was set up in October 2012 to help improve dialogue with the media. It draws on best practice from government communication operations across the world, carefully adapted for Kazakhstan.

At its heart is the recognition that citizens of all countries want more information about what is happening in their country and it is the task of governments, through their media, to provide it. The creation of the CCS is Kazakhstan’s answer to this challenge.

But while the briefing is the public high-point of the week and requires hours of hard work and careful planning, it is by no means all the CCS does. The new body is working behind the scenes every day to improve the quality and flow of information to the media and ultimately, of course, the public.

The CCS is a mixture of young highly professional staff. For many of them, it is their first job since leaving university and they bring a real energy to their work.

Aliya Abulkhairova, who works in the Front Office dealing with journalists, is one of the new generation helping make the CCS a success. She says: “It is exciting because I am learning a great deal. No day is the same. It is hard work but rewarding and we all feel we are doing something very worthwhile.” 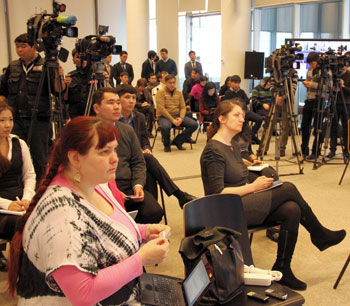 The CCS is made up of different units which help co-ordinate communication planning between central Government, individual ministries and regional authorities, and prepare and distribute information for the media and through its own website. Each has its own tasks but must work very closely together.

Information planning is key to foundation of the whole operation. It is their task to draw up a grid of the announcements and activities across Government by liaising with ministries, agencies, and regional bodies who supply the information.

Major international events such as conferences which may attract media and public attention in Kazakhstan are also included. The aim is to produce as complete a picture for the weeks ahead of upcoming activities as possible so the Government has time to prepare and provide the material that the media may need.

It is the Front Office who deals directly with journalists and can provide them with information when they call. They help distribute press releases for ministries. It is also their job to organise the weekly briefing, which is not an easy task when as many as 130 journalists want to take part in person or through live video link.

The front office also oversees the new CCS website, www.ortcom.kz, launched earlier this year. Some of Kazakhstan’s leading specialists on the internet and social media have been recruited to increase the effectiveness and reach of Government communications through digital channels.

They are developing a state-of-the-art website with the goal of getting information out quickly to the media and wider public in a bright and accessible way. This transparency and speed is what is expected today of governments in every country.

It is still early days but the CCS believes it is already making a difference. Government ministries and the media are recognizing how it makes their job easier.

Abibullayev added: “We know we have a lot more to do. With the help of our colleagues in many different ministries, agencies and ministries, we are helping explain better what the Government is doing. And that’s important.”