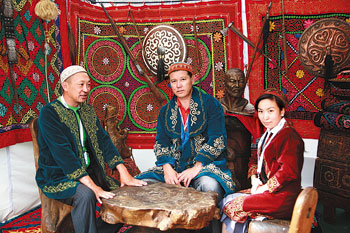 generations of craftsmen in the Shokparov family have honed their skills.

ALMATY REGION – Battle swords, jars for koumiss (the traditional mare’s milk drink) and jewelry boxes are all made from natural materials at Akshi village, Enbekshikazakh district, where generations of craftsmen have honed their skills.

Graphic designer Daulet Shokparov, who creates unique pieces of traditional Kazakh art, comes from a long line of craftsmen. His great-grandfather, grandfather and father worked with metal, leather and wood, and he has inherited their gift.(He first showed an interest in this kind of work at age seven) Now, the work of these generations of craftsmen is being displayed and preserved in the Darkembay Shokparuly Ethnographic Museum. This complicated work requires creativity as well as a jeweler’s precision and patience.

“Hasty people cannot ‘take root’ in our art,” Shokparov says. “They come and go almost immediately, unable to maintain a serious rhythm. It all depends on your inner tranquility. After all, while you’re working, you are surrounded by a lot of sharp objects and tools. Safety in our practice is a priority, along with quality of work. It starts with the love of the profession. Patience and meticulousness together open the secrets of our art.”

Shokparov knows what he’s talking about. He was disciplined at his father’s knee. Darkembay Shokparuly, a member of the Union of Soviet Artists and Designers of the USSR, was known across the country as a scientist-ethnographer.

Darkembay Shokparuly, who hated idleness, fostered in his children a love for work. A Renaissance man, he stamped metal, carved wood sculptures and painted in oil. He was chief artist-restorer at the Kazrestavratsiya National Museum of Applied Arts and head of the department of metal and wood arts at the Zhurgenov National Academy of Arts. 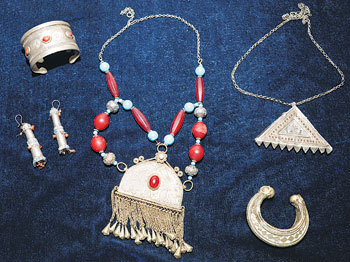 Kazakh traditional jewelry made from natural materials fascinates by its beauty.

The results of his years-long scientific research are more than 200 scientific articles on folk arts. He himself created unique objects, while also collecting vintage household items, musical instruments, weapons and armour. In his native village he organised a school-workshop, Asyl (“precious” in Kazakh), where he taught young people ancient folk crafts and traditions.

Now his son, Daulet Shokparov, director of the Darkembay Shokparuly Ethnographic Museum, is passing the torch. The museum opened in July 2010 in his father’s house as part of the state cultural heritage programme. Daulet Shokparov has donated all the items his father collected. There are six exhibition halls in the museum, which is a temple of history. Here, young scientists can trace the origin and development of Kazakh arts and crafts. Now Shokparov teaches his sons and assistants the nuances of Kazakh art.

Studying the works of old masters, the artists from Akshi village have resurrected the manufacturing technology of leather housewares. They have become highly sought-after masters. Their bracelets are very popular among women, and men have snapped up horse harnesses and saddles.

The beautiful museum, built in the oriental architectural style and blended splendidly with the surrounding majestic peaks of Alatau attracts the attention of travelers on the Ghuljin route. Akshi village is located on the ancient Silk Road. The old crafts revival and the artisans’ works of art are becoming the region’s calling card. Focused museums like this one could become magnets for tourism, attracting lovers of antiques and instilling in local people a sense of pride in their country.