Future of Nuclear Power Moves into Focus of Considerations

ASTANA –Today, the power industry is the most important driving-force for world progress. Many believe that the greatest contribution to meeting the demand for energy and providing stable socio-economic development, for humanity in the 21st century will be made by the nuclear power industry. 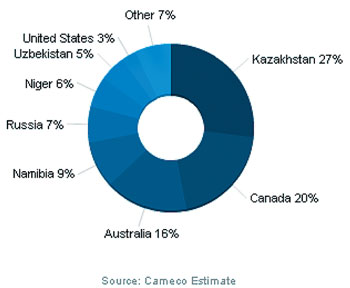 It is obvious that Kazakhstan’s power industry development will, sooner or later, follow this route. Therefore, in 2011 the government of Kazakhstan adopted a programme to develop the national nuclear industry.

“Development of the peaceful nuclear power is the only way to meet the growing demand for energy,” President Nursultan Nazarbayev told an international forum for a nuclear weapons free world in Astana in 2011.

President Nazarbayev said the nuclear industry was a major force of innovation for Kazakhstan’s future as the country holds about 25 percent of global uranium reserves.

“We have all the industrial infrastructure of nuclear power and a huge scientific potential. And we ensure the safety and security of all the peaceful nuclear power facilities,” he said.

Thepresident has, therefore, instructed the government to determine a suitable location to build the country’s first domestic nuclear power plant. [Kazakhstan used to have a nuclear power station in Aktau which was decommissioned in the 1990s.]

“Let us proceed to the stage of actual construction,” the president told Vladimir Shkolnik, the head of the KazAtomProm Nuclear Company. “There have been a lot of arguments whether it is better to have a nuclear power plant in the centre of the country or in Aktau in Western Kazakhstan. Let us define a place and start actual negotiations with a partner.”

“I assign the government the task of assessing the current energy balance,” the president said. “It will take many years to build a nuclear power plant. Many factors should be taken into account in the long run. I, therefore, instruct the government to submit specific suggestions in the first half of 2013.”

“In the very near future, we will have to define the place of nuclear power in the overall power balance, determine the location of future power plants, choose an optimal technology and solve a lot of related problems from personnel development to possible participation of Kazakhstan-based enterprises in construction of nuclear power plants,” Yashin said.

“The construction of nuclear power plants is seen not only as an additional source of power, but also as a major driving force of industrial development: The construction of such facilities calls for sophisticated technology. All this will promote the development of related industries,” he said.

Yergazy Kenzhin, director of the Nuclear Energy Institute of Kazakhstan National Nuclear Centre, said Kazakhstan may become a leader in exporting electrical energy among Commonwealth of Independent States(CIS) countries in the post-Soviet space after switching to nuclear power generation. He thinks nuclear power stations are feasible as basic energy sources that could become a core for the whole energy system of Kazakhstan.

“If we establish a nuclear power complex generating 1 gigawatt (GW), it will be able to compete with thermal power stations and we will benefit from that, especially in the long-term perspective of the economy’s development,” he said.

Kenzhin said the development of industry in Kazakhstan was directly linked to the amount of electrical energy the country produced domestically. He said energy production growth should, therefore, exceed the growth rate of domestic demand. He also said domestic nuclear power plants should have a high level of security.

“What happened at Fukushima (in Japan in March 2011) is primarily associated with the use of an old design of nuclear reactors and the tsunami,” Kenzhin said. “Nuclear power plants stand at the same level as green energy sources in their ecological parameters. The amounts of spent nuclear fuel produced by nuclear power plants and the emissions of the coal station are not comparable.”

“We have to export energy instead of uranium. This should be the case for all mineral resources,” he said.

Kenzhin also said the first two nuclear power complexes with a capacity of around 1GW each could be built in Kurchatov in the East Kazakhstan region in 2020-2022. The plants would have third-generation reactors.

Timur Zhantikin, head of the Nuclear Energy committee the Ministry of Industry and New Technology, said the government was also considering the construction of a nuclear power plant in South Kazakhstan.

“Research is under way to determine the locations of nuclear power sources. The first possible option is Balkhash Lake;the other option is the South Kazakhstan hydropower unit in the energy-hungry southern part of the country,” he said. “The third option is in the west of the country. From the point of view of the national power industry development, the optimum choice would be the South Kazakhstan hydropower unit. A feasibility study has been done.”

“Currently, we are working on the industry master plan up to 2030. By 2030 approximately 4 percent to 4.5 percent of domestic power should be generated by nuclear power plants,” Zhantikin said.

Kazakhstan is considering the construction of nuclear power plants with a total investment of $63 billion.

“We study the possibility of building a nuclear power plant with up to 1 GW. Generation growth will make 62 percent and the total amount of an investment is estimated at the level of the current year in the amount of $63 billion dollars or 9.5 trillion tenge,” Samruk-Energo Chairman Almasadam Satkaliyev said.

Nevertheless, the Ministry of Industry and New Technology has declared that Kazakhstan will not give up nuclear energy. And Umirzak Shukeyev, the chairman of the Samruk-Kazyna National Welfare Fund, said the country needed to make up its mind quickly about constructing a nuclear power station.

“Kazakhstan has not given up on nuclear energy,” Minister of Industry and New Technologies Asset Issekeshev said at the government meeting.

Issekeshev confirmed that the construction of a nuclear power plant remained very much on the agenda. However, it was seen as a long-term objective and no decisions have yet been made on the type of reactor, the site or the timing of the project. “Safety, and the selection of the best technology, would be major considerations,” he said.

“We produce nuclear fuel, we have huge reserves of uranium and you know that these are our advantages. I think it does not make sense to have the fuel and the raw materials and not to have a nuclear station. That is why we have to keep on working on construction of the nuclear power station and we have to make up our minds as soon as possible,” Shukeyev said.

Prime Minister Serik Akhmetov also pledged to build a nuclear power plant when he presented his vision for the development of Kazakhstan’s power industry to 2030 to the government. He said the Ministry of Industry and New Technologies and the Ministry of Economy and Budget Planning were already currently working on plans for it.

The government of Kazakhstan began discussing construction of the nuclear power plant six months ago.

“It does not contradict with our general goals and the movement to a nuclear-free world,” Kanat Saudabayev, Chairman of the Presidential Commission on the Non-Proliferation of Weapons of Mass Destruction and Director of the Nazarbayev Center said answering a question from a foreign journalist on whether it was right for Kazakhstan, as a country that actively propagates a nuclear weapons-free world, to construct its own nuclear plant.

The nuclear power industry has considerable potential for Kazakhstan and its development will significantly increase the potential of the whole national power sector.