By Assem Kazybay in International on 6 February 2013

ASTANA – On Feb. 3, 2013, the Minister of Foreign Affairs of Kazakhstan Erlan Idrissov finished his official visit to the European Union, which included stops in Brussels, Berlin and Munich. 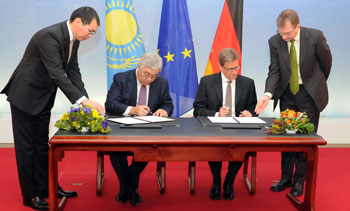 Foreign Ministers Idrissov and Westerwelle sign a joint declaration on the future work of their minissties during their meeting in Berlin on Feb. 1.

On Jan. 29-30, on the occasion of the 20th anniversary of establishment of diplomatic relations between Kazakhstan and the European Union, Idrissov visited Brussels and met with European Commission President Jose Manuel Barroso, European Parliament Vice President Othmar Karas, the European Parliament’s head of the Delegation for Central Asia Paolo Bartolozzi, EU Special Representative for Central Asia Patricia Flor. He also held talks with the Secretary General of the Council of Europe Thorbjorn Jagland and the Secretary General of NATO Anders Fogh Rasmussen.

Kazakhstan’s winning the right to host EXPO 2017 under the topic “Future Energy,” Kazakhstan’s prospects for joining the World Trade Organization, development of regional integration processes, including within the Customs Union and the Common Economic Space and mutually beneficial cooperation were among the topics of the talks.

The parties confirmed their interest in strengthening the constructive dialogue in inter-parliamentary relations, global and regional security, rehabilitation and development of Afghanistan, energy, civil aviation, education, science and technology, democracy and human rights among other issues.

The foreign minister conveyed a message from President Nazarbayev to the president of the European Commission, who confirmed his intention to visit Kazakhstan in 2013, emphasizing the symbolism of such a visit coinciding with the 20th anniversary of establishing diplomatic relations.

Bartolozzi noted that the simplification of a visa regime is a very complex and multifaceted issue that requires coordination among the 27 EU member states and the Schengen area member states.

“I think we can find a solution that will be very beneficial for both parties because the European side is aware that the European Union is the largest trading partner of Kazakhstan… In order to develop trade and economic relations and ensure the development of Central Asia, we can find ways to ease the visa regime,” he said.

At a meeting with Jagland, the parties discussed the current state and details of bilateral cooperation. The effectiveness of joint work in various formats was also noted including through the agreement of the Senate of the Parliament of the Republic of Kazakhstan and the Parliamentary Assembly of the Council of Europe, in the frames of the European Cultural Convention, the Venice Commission, the World Forum for Democracy.

Idrissov noted the importance of Kazakhstan’s joining the Medicrime Convention (which deals with criminal responsibility for the counterfeiting of medical products) and the Conventions of the European Council for criminal proceedings and anti-corruption work.

At the meeting with NATO Secretary General Anders Fogh Rasmussen, the parties shared views on political and military cooperation, development of inter-parliamentary relations, the interaction of the Alliance with security structures in the Eurasian space and cooperation in the frames of the Individual Partnership Action Plan.

Another important topic was the situation in Afghanistan and that country’s security and socio-economic rehabilitation after 2014. The NATO secretary general thanked Kazakhstan for its support of the international coalition in Afghanistan, especially in transit issues and assistance in training Afghan students in Kazakhstan universities.

During his visit, Idrissov delivered a speech in the Brussels Press Club and answered questions on the current domestic and foreign policy of our country.

From Jan. 30 to Feb. 3, 2013, Idrissov paid an official visit to Germany on invitation of Federal Foreign Minister Guido Westerwelle and held a number of bilateral meetings with German political and business officials.

On the last leg of his trip, Kazakhstan’s Foreign Minister participated in the 49th International Conference on Security Policy in Munich.

“Eurasian security is an integral part of the new common global security,” Idrissov underlined in his address at the session devoted to issues of security and stability in South-Eastern Europe and the Caucasus.

Idrissov noted that “three years ago, the OSCE (Organization for Security and Cooperation in Europe) Summit in Astana adopted a declaration, which first introduced the concept of Eurasian security, as well as close relationship between the Euro-Atlantic and Eurasian security dimensions.” As an OSCE chairman in 2010, Kazakhstan determined that one of the priorities in the field of security was the active assistance in resolving “frozen conflicts” in the area from Vancouver to Vladivostok, and contributed to this difficult process.

“Kazakhstan, being at the centre of Eurasia, is a very important connection between Europe and Asia, and we are pleased that our role in this regard is on the rise,” Idrissov said.

Speaking about today’s topical tasks for security in Kazakhstan and in the region, the foreign minister called the Afghan problem a priority.

“When we talk about the problems of peace and security in our part of the world, Afghanistan comes first,” Idrissov said, noting that Kazakhstan is fully committed to bringing peace and stability to that country in conjunction with coalition partners. In this context, Idrissov informed participants of the Munich conference on the convening of the Third Ministerial Conference of the Istanbul Process on Afghanistan in April in Almaty.

Concerning the interdependence of security issues in South-Eastern Europe, South Caucasus and Eurasia, the foreign minister noted that these regions, located between the Caspian, Black and Mediterranean seas, are the natural areas of resource and transit cooperation for each other, which determines their common interest in resolving existing crises and ensuring long-term regional stability. In this case, economic growth must be the driving force to strengthen stability.

“Stability will stimulate economic growth, and economic growth in its turn will strengthen stability,” Idrissov said noting that Kazakhstan is interested in the expansion of these markets for its own interests and the interests of the region.

He mentioned the steps taken by Kazakhstan in this direction, including the acquisition of assets of the Romanian company Rompetrol, participation in the Baku-Ceyhan oil pipeline and the acquisition of marine terminals on the Black Sea.

During the conference, Idrissov held several bilateral meetings with his counterparts from Spain, Poland, Turkey, Israel, Italy, as well as Chairman of the UN General Assembly Vuk Jeremic and others.