Fighting for the Rule of the People

The Communist People’s Party’s faction in the Mazhilis of the Parliament of Kazakhstan was not built from scratch: We have been involved in national politics for a long time. The party contests parliamentary seats and declares its positions on policies to the public at all levels. 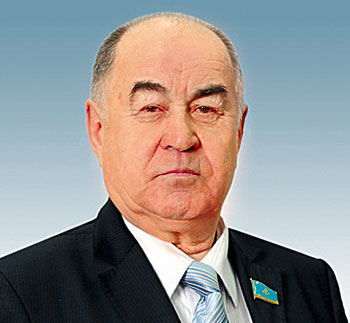 We addressed the government and the executive office of the president and clearly presented our positions on all issues before the national elections. Our programs are aimed at improving social welfare.

A three-party legislature is new for Kazakhstan. Fortunately, in Parliament, we do not feel any kind of neglect. Our contributions are weighed and considered. We do not hear reproaches or sneers from our colleagues in other political parties. We work as equals, but, of course, the number of seats we have does not give us the opportunity to carry out our policies. What is most important is that we know the voice of the Communist People’s Party is heard in Parliament. It did not fade and we clearly declare our principles and positions.

The Communist People’s Party wants to achieve its goal of helping people get the housing they need. In September 2012, the government launched its Affordable Housing 2020 programme. This plan still has serious shortcomings and distortions, but it aims at responding to the requirements of the people.

The distortions and omissions in this programme are as follows: It has not taken into account that the employer has to participate in solving the housing problems of his employees, to build a house and pass it on to the people in need on certain conditions. Houses, for example, could be purchased, leased or provided on proprietary possession for merit at work.

The advantage of the three-party legislature is that it does not express the voice of only one party, but takes into consideration the views of all three. Our party raises questions of the most public concern.

The Communist People’s Party has recently protested the attempt to increase the retirement age for women from 58 years to 63 years. Our appeal was also reflected in the decision of President Nursultan Nazarbayev to unite all pension funds in a single fund under state administration.

We also discussed the necessity to help farmers and agricultural workers by maintaining existing farms. That is an initiative of our faction and we are studying these issues very seriously.

When our members of the Mazhilis of the Parliament raise issues, we study them at the level of governmental implementation, the views of other political parties and the way they are covered in the mass media. This was the way we approached the issue of food production and supply.

The work of our parliamentary faction closely intertwines with the work of the party’s central committee. If issues are discussed at a plenary session, the same issues are considered in Parliament from the parliamentary perspective.

This work is conducted by primary party organizations, but as soon as the Parliament makes statements, the political activity begins. We insist that these movements be picked up in the lower party organisations at the regional committee, district committees, and primary party bodies. Thus, to create united movement of Communist People’s Party deputies, we take a series of coordinated steps. And our party organisation gives priority to working with the public.

Our party gives importance to improving the number of farms and the conditions under which they operate. We recognise the importance of the agricultural sector in providing food for the general population and employment for the rural population. Today, meat is expensive because of the shortage of fodder to feed livestock. We raise this and other issues in Parliament.

The Communist People’s Party is not losing its ideological direction at a time when the state has started to move towards the modernisation of the social sphere, the economy and culture under the new Kazakhstan 2050 national strategy. This practically coincides with the ideological directions of our party. Our party, therefore, agrees with this national strategy and supports the government in implementing it. We will continue the work together because it is right and because we have never ceased to be patriotic.

At the same time, the goal of our party is to enhance the role of ordinary citizens, and the rule of the people in the management of state affairs.

It is necessary to implement the national employment programme, which we have carefully studied. Our party is committed to improving the working conditions of the people and to achieving full employment. We consider that employment is the main factor in maintaining the welfare of society.

What does self-employed mean? It means people who do not participate in the production of gross domestic product, who do not keep records of their working contributions and who have no right to use national health services. It is time to stop this disregard towards these people from the side of the state. Therefore, our party insists that all people should be employed.

Ordinary people should be involved not only in the working process. They should also be involved in the industrial innovative development of the state. The population needs to be directed by state programmes to help them learn to master new technologies, study science and raise the country so that the bourgeois forms of oppression do not prevail in Kazakhstan.

We also strive so that people can get a good salary and enjoy the necessary vital conditions for life, health protection, childcare and other social services.

We want to achieve all these goals as quickly as possible to ensure that the fruits of labour are the property of all the people.

The plans for the future development of Kazakhstan have great potential. This progress should serve all of society, but the people should participate in it fully and ensure that their voices are heard by those who have the means and the power.

We recognise that we have relatively little electoral support. Half a million people voted for us in the most recent parliamentary elections. We have the goal of winning 10 percent of the vote in district and regional elections. We continue to make the case that bourgeois society does not show respect for all people and that it is inevitably characterised by acquisitiveness and corruption.

If the Communist People’s Party will be involved the representative bodies, we will effectively curb the negative effects that prevent the full development of our society.

The author is the leader of the Communist People’s Party of Kazakhstan.