ASTANA – Kazakhstan has vast opportunities and resources for agricultural development. It is already one of the world’s top 10 wheat producers and a global leader in exporting flour. 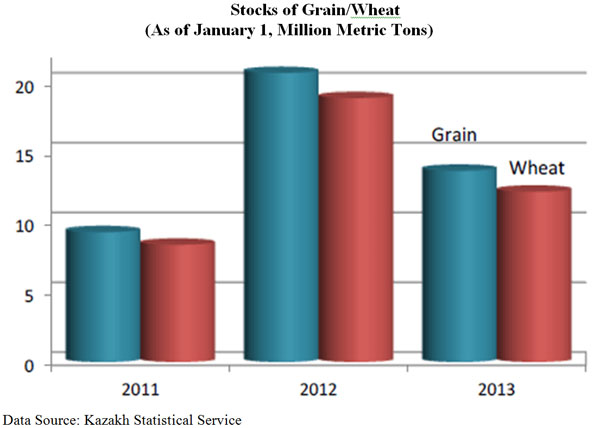 However, President Nursultan Nazarbayev has warned that the agriculture sector requires support and a high-quality plan for its future development.

“One of the crucial points we must focus on is the modernisation of agriculture. Kazakhstan should develop farming, and small and medium businesses in the agricultural sector. Food products should become the main export of the country. Kazakhstan has all that it takes to achieve this goal,” the president said.

In order to promote the rural economy, the government is implementing several programmes to improve the investment climate for farming. The country’s farmers are gradually embracing new technologies, reducing production costs and winning new niches for their exports in regional markets.

The government of Kazakhstan has approved a new agro-industrial development plan for 2013-2020. The programme is to focus on four key areas:

• strengthening the state regulation system for the agro-industrial sector.

“We intend to support all priority agriculture sectors, including animal husbandry, meat projects, the development of moisture saving technologies and the Zhaylau programme. All investment projects undertaken by private companies will get our support in this programme,” said Yevgeny Aman, who until recently served as executive secretary of the Ministry of Agriculture .

Prime Minister Serik Akhmetov has said that the main task of the programme is to increase the role of high tech production in agriculture and to give more state aid to the rural population.

“The Agro-Industrial Complex Development Programme for 2013-2020 will be adopted this February and 3 trillion tenge will be allocated to the development of agriculture within it,” the prime minister said.

Valentin Dvurechenski, the head of the Kostanay Research Institute of Agriculture, has worked in the agricultural sector for over 50 years. He said the new programme would transform national agriculture.

“We joined the Customs Union and plan to join the World Trade Organisation. The new programme will help us to be competitive. It will allow Kazakhstan to make a breakthrough in agriculture,” he said.

President Nazarbayev has made agricultural development a high national priority. And he has stressed the importance of making microcredits easily available in rural areas.

Microcredits issued through the Fund for the Financial Support of Agriculture (FFSA) are the main source of credit for the rural population. So far, the fund has provided microcredits for more than 65,000 people, comprising 63 percent of all credits issued in rural areas.

In 2012, the FFSA extended 3,732 microcredits totalling 3.14 billion tenge to agricultural producers. Since the FFSA programme was launched, the fund has extended 66,662 microcredits for rural area residents worth 17.9 billion tenge. These microloans financed jobs for 71,695 people and paid for the purchase of 383,000 cattle and grain grown on 52,000 hectares (128 acres) of land.

Some 90.7 percent of microcredits extended in 2012 were used for livestock farming development, 2.3 percent for growing crops and seven percent to finance businesses.

The main goal of the exhibitions was to increase the competitiveness of Kazakhstan farmers and related businesses by implementing new technologies in production, and to promote sales in domestic and foreign markets.