EU-Kazakhstan Relations Must Evolve. Oil Is Not the Future

When the first oil is pumped commercially out of the Kashagan field this year, it will be the result of over a decade of close collaboration between Kazakhstan and international energy companies. The technically challenging conditions which include extreme temperatures, shallow waters, and difficult geology have brought the best minds in the industry to our nation. Kashagan and other projects in the Caspian would not have been possible without the expertise of Europe’s energy companies. 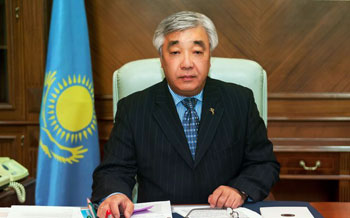 Total, Eni and Shell have invested heavily in the Caspian area. For the consortium of companies delivering the project, the benefits are clear. The Kashagan field is the biggest discovery in four decades with the potential to deliver over 12 billion barrels of oil.

The partnership will also bring huge benefits to the people of Kazakhstan – something we have already seen through our existing successful partnerships with international energy companies. Oil and gas has driven the ten-fold increase in our national GDP in the last 15 years with the revenues invested wisely in our future and our citizens.

Our people enjoy living standards which they would not have imagined when our country became independent 21 years ago. We have put money aside to protect us from global economic shocks and, at the same time, invested in modern infrastructure, health, welfare, education and skills. Energy companies, too, must play their role in developing local skills and expertise to leave a lasting legacy for the citizens of Kazakhstan.

And, of course, Europe has benefited too as we have helped meet vital energy needs. The European Union is our biggest trading partner with oil and gas making up 80% of our exports. The new developments in Kazakhstan will allow us to ease Europe’s energy security concerns for decades to come.

But while oil, so far, has been the economic bedrock of EU-Kazakhstan relations and the springboard for our remarkable economic growth, we do not allow it to define our future. We are investing heavily to diversify our economy and grow high-skilled, hi-tech industries. Crucially, we also recognise that the global battle against climate change means that there has to be a switch away from fossil fuels towards renewable sources of energy.

It might seem strange to be talking about climate change when much of Western Europe has been hit by freezing temperatures and snow. But, of course, there is nothing surprising about sudden bouts of cold weather even as annual temperatures are reaching record highs.

Climate experts have long warned that more frequent and severe bouts of extreme weather – whether droughts, heat-waves or freezing spells – will also be the result of the changes we are making to our atmosphere. As we look around the world, there is plenty of evidence to suggest that this pattern is already well underway.

We have to find ways together to power our economies without poisoning our atmosphere. This must, we believe, include extending civilian nuclear power to new countries.

I know this can cause alarm. There are real fears that enriched uranium could be diverted from civilian purposes to make nuclear weapons or fall into the hands of terrorist groups. But we believe such concerns can be eased through a Nuclear Fuel Bank, built in Kazakhstan, under the auspices of the International Atomic Energy Agency.

The bank would provide enriched uranium to countries who want to develop their civilian nuclear programmes and take it back for re-processing. With our stability as a country, our expertise on nuclear safety and our record of having voluntarily renounced the world’s fourth biggest nuclear arsenal, we believe Kazakhstan is an ideal host for the bank. The IAEA have welcomed our offer and talks are in an advanced stage.

Nuclear energy cannot be, of course, the sole answer to powering economies in a sustainable way. We also need the rapid expansion and development of renewable energy sources.

Last month President Nursultan Nazabayev set our country the task of meeting at least half of our own energy needs from alternative and renewable sources by 2050. For a country with some of the world’s largest fossil fuel reserves in the world and a very small renewable sector at the moment, it was a bold statement. But there is huge potential, for example, to develop wind and solar power in our country as well as cut energy waste. Europe is already a world leader in this sector and we need your expertise to help us meet these ambitions.

It was our focus on ‘Future Energy’ as our theme which helped Astana, our capital, win the right to host Expo 2017. We are confident that the chance to showcase the latest energy developments from around the world will help accelerate the green energy revolution we need.

We see Expo 2017 as a key part of our Green Bridge initiative to bring together governments, international organizations and private business to find solutions to sustainable growth. We have to be ambitious in creating partnerships to share technology and best practice with countries throughout the world, no matter what their stage of development. We can only begin to tackle climate change successfully when it can be done without putting the brakes on economic growth.

Since our independence over twenty years ago, Kazakhstan’s relations with the EU have been defined by energy. Our oil wealth and projects such as Kashagan guarantee this partnership for decades to come. But as climate change and economic efficiency force a change of energy habits, so it will change the nature of the economic relationship between us. But just as European companies have been central to our remarkable success so far, so they will be central to our fulfilling our bold ambitions for the future – for the benefit of everyone.

The author is the foreign minister of Kazakhstan.

This opinion first appeared in Euractiv on January 30, 2013, and is also available at www.euractiv.com