EU and Kazakhstan: Twenty Steps Towards Each Other, Twenty Years of Comprehensive and Vibrant Partnership

This year, the European Union and Kazakhstan celebrate the 20th anniversary of the establishment of diplomatic relations. On the eve of the anniversary, on 29 January, Foreign Minister Idrissov visited Brussels. His meeting with President Barroso gave an opportunity to take stock of the two decades that have elapsed since the first official visit of President Nazarbayev to the European Union, on 2 February 1993. On that occasion, the agreement on the establishment of a permanent EU representation in Kazakhstan was signed. Bilateral relations between the EU and Kazakhstan entered a new stage of mutual recognition and interaction. 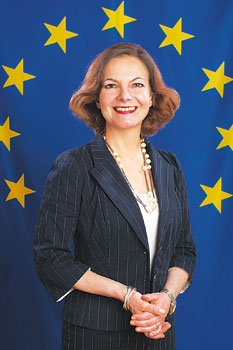 In terms of human life, 20 years is not old. And I feel tempted to dedicate my comments on this anniversary to the youth of Kazakhstan, to students, to the new generations. It is not an accident that almost all the activities we plan to celebrate the occasion will take place in schools and universities – classroom lectures by European Ambassadors, academic conferences, civil society gatherings or concerts and exhibitions. The young people will not be the audience – they will be the participants and the performers.

When relations between the EU and Kazakhstan began 20 years ago, determination and dedication were required from both sides. From the start, Kazakhstan made the strategic choice to develop links with Europe and consistently pursued this direction, notably thanks to the Path to Europe adopted in 2009. The EU did its best to support Kazakhstan’s steps – very rapid steps! – towards full independence and towards economic and social sustainability.

In Kazakhstan, as in other countries in the region, the European Union is concerned with such key issues as development, democracy and security. They are at the heart of the EU Strategy for Central Asia, and are becoming more pressing than ever as security challenges in the region increase. This is why the EU and the five Central Asian states decided last October to set up a new EU–Central Asia High Level Dialogue to enhance our engagement on security issues, including on Afghanistan.

And here let me stress the central role played by Kazakhstan . On security, we would like to praise in particular the contributions made by Kazakhstan with regard to Afghanistan post-2014; through the provision of training and education to Afghan students, but also through the Heart of Asia process and the hosting of the Ministerial meeting next April. As to economic development, Kazakhstan is now an upper middle income country, with over USD 12,000 per capita income; it also attracts the bulk of Foreign Direct Investment (FDI) in the region. As OSCE Chairman in 2010, and now as a member of the UN Human Rights Council and of the Venice Commission, Kazakhstan has taken important steps in the ongoing process of democracy consolidation. We appreciate Kazakhstan’s pivotal role for the stability and the security of the region, thanks to its constant emphasis on good neighbourly relations. We also appreciate the global initiatives launched by President Nazarbayev, in particular in the field of nuclear non-proliferation, but also the effort to address the climate change-security nexus with initiatives like the Green Economy project.

It is not, therefore, surprising that Kazakhstan is the only country in the region with which the EU is currently negotiating a second generation agreement, the “enhanced Partnership and Cooperation Agreement”, which reflects our very broad and comprehensive relationship with Kazakhstan. Practically all areas of life are covered, paving the way for deepened and expanded dialogue and cooperation, based on mutual trust and respect, shared goals and interests.

EU–Kazakhstan relations show an impressive record of achievement over a relatively brief period of time.

And now? Now, the EU is Kazakhstan’s first trading partner and first provider of FDI. It is the main destination of Kazakhstan’s exports and the main source of its imports. Kazakhstan is key for the EU’s energy security, European companies are key for the development of Kazakhstan’s impressive oil and gas reserves – a shining example this year will be the Kashagan oil field. The EU is also Kazakhstan’s partner for the further modernization of its institutions and structures, in particular in the areas of public sector reform, judicial reform and regional development. Such cooperation contributes to the consolidation of democracy, the empowerment of civil society and also to the improvement of the business climate – all areas which are indispensable for a fully modern state and for its citizens. With Kazakhstan, the EU has also developed a mutually confident and fruitful dialogue on political and security matters, and we constantly seek ways to support each other on international issues of common interest. Your experience of the broader region is of interest to the EU, and you know our overall objectives. We can work together in a complementary and mutually supportive manner.

Ours is a partnership oriented towards peace and modernity. I have briefly spoken about peace and security. Let me dwell on modernity, which goes hand in hand with education, innovation, new technologies and research.

Modernity, in my view, begins with education. And here let me praise Kazakhstan for its achievements in this field. In 2009, Kazakhstan ranked first in the UNESCO’s Education for All Development Index, with particularly positive results in securing a near universal level of primary education, high adult literacy and full gender equality. The remarkable Bolashak program designed by President Nazarbayev allowed young Kazakhs to find their way to foreign universities. From 1994 on, the priority given to education has been supported by the EU, notably through the Tempus and Erasmus programs. 22 universities from Kazakhstan are involved in Tempus, 600 students and teachers in Erasmus partnerships for mobility. These decades of efforts provide Kazakhstan with enlightened and socially mobile elites, as well as with intellectual back-up matching the country’s active role in the region and beyond.

Modernity cannot be dissociated from the quest for innovation; this is another common point between the EU and Kazakhstan. We already cooperate on topics that belong to the future through the European Space Agency programmes at Baikonur. There are new and very promising prospects for using the EU’s FP7 programme for Research and Technological Development to further develop research and innovation efforts in Kazakhstan. And I am sure that EXPO 2017 in Astana, with its focus on Energy for the Future, will boost our cooperation, given the EU’s unmatched experience and expertise in the field of renewable energy and its attachment to the promotion of sustainable energy as a contribution to UN-led efforts on the Rio and Doha agendas.

Last but certainly not least, modernity is about freedom – freedom to think, talk and exchange. In Europe, we learnt the importance of this with Galileo. A free society, a free economy and free trade are the best foundations for sustained prosperity and lasting stability, ensured by a broad consensus acquired through political dialogue and a vibrant civil society. Effective implementation of fundamental freedoms, and respect for the rule of law, are part and parcel of a modern democracy. They also ensure prosperity, since economic actors value predictability and transparency, as well as fair legal process. And we are all aware that freedom needs to be accompanied by social justice, as well as by the concern to avoid burdening future generations with ecological disasters. We know how much Kazakhstan’s authorities pay attention to these issues, and here again we stand ready to provide help and support.

Let me be clear here. We in Europe do not set ourselves up as examples, since we may have our own shortcomings. We do, however, have experience and expertise drawn, sometimes painfully, from our history and also from the transition made by some EU Member States in the 1990s. We have commitments, as members of the OSCE and parties to UN legal instruments which also apply to Kazakhstan, and all of us have to deliver accordingly. Cooperation with the EU can benefit its partners. In this regard, we appreciate Kazakhstan’s interest in getting closer to EU standards, and look forward to further progress.

The success of our relationship is a two-way process. In many fields, it is clear that we need each other. Thus, since much is at stake in EU–Kazakhstan cooperation, each of the two sides is determined to make its best efforts to pursue our win-win relationship. A few months ago, on her first official visit to Kazakhstan, EU High Representative Catherine Ashton had a clear message for all her interlocutors in Kazakhstan: Be assured that the EU will remain faithful to its commitments to Kazakhstan and to the rest of the world, to protect peace and democratic values for future generations.

The author is Ambassador of the European Union to Kazakhstan.