By Miras Abykov in Culture on 6 February 2013

Photographer, artist and designer Veronica Preobrazhenskaya became world famous by creating fantastic collages. Within a short time, the 20-year-old girl from Kazakhstan entered the elite circle of the best photo-illustrators in the world and became the country’s blogger of the year. 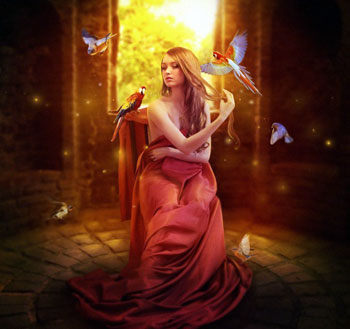 The creations of Veronica Preobrazhenskaya impress viewers with their unusual play with light and colour.

Preobrazhenskaya is an exponent of “dark art.” It is a style defined as being “dark” or unsettling in nature and it goes under such names as gothic, metaphysical, horror, nightmarish and disturbing. It is presented in a variety of techniques and styles.

Despite her youth, Preobrazhenskaya has already won recognition as one of the most effective creators in the form on the largest design site in the world. One American admirer described her achievement as “creating high-budget images at a fraction of their cost.”

“I was invited to work in the United States, but only on a single project, Preobrazhenskaya told The Astana Times. “That’s why I did not agree to do it. I’m better known in Russian cities than in native Kostanai. Most of my subscribers are from Moscow, St. Petersburg and Chelyabinsk.”

However, in 2012 Preobrazhenskaya finally received her recognition in Kazakhstan, as well when she was named the best creative blogger of the year.

The Astana Times interviewed Preobrazhenskaya to learn about her achievements and her art.

How long have you been engaged in art?

It all began when I was a child. I was gifted with a highly developed imagination, and at first I did not know where to apply it. I had a dream about a device which could write or make pictures of ideas in my mind. I started to draw when I was five years old. When I went to school, I used to draw during the lessons. I often drew in the Gothic style. For that I was often chastised by teachers and sent to social workers. I was a difficult child and I had continual problems with society, so I didn’t communicate with anybody and I had a lot of time for drawing and learning graphic programmes. Then at age 13 I bought my first cheap camera and I fell in love with photography. I had a dream to become a photographer.

How do you create your photographic style?

I believe that to make a good photo, it is first necessary to have at least some imagination. You must have the ability to draw, to have knowledge of photoshop technology and at least an average camera. It is desirable first to sketch, then to make the image in accordance with it. Sometimes when new ideas come into your mind during the photo-shoot you need to improvise – improvising is always very good. An even greater role is played by the choice of the model – the model should be emotional. In photoshop technology, the main thing is the ability to use textures.

Do you have any role models who inspire you?

No, I don’t. But I have viewed thousands of works by foreign creators of digital art.

Have you ever thought of holding an exhibition of your works?

It is hard to carry out such an event in our town. It is necessary to have money to hold an exhibition. Then you have to wait half a year or a year to get a suitable location where you can display it. So in the near future I am not planning anything.

Did you study in an art academy or attend any photography courses?

I studied at the Art School for several years, and then had a self-education. I studied graphic programmes independently at home. In the same way I learned the settings on the camera.

Why is dark art not as popular in Kazakhstan as it is in the West or in Russia?

The population of Kazakhstan is relatively small and, therefore, the number of people who are interested in art is very little. There’s nothing else I can say about it.

What do you do in your spare time? What kind of music do you listen to?

Mostly, I read and draw when I’m not taking and editing photos. Recently, I’ve been listening to Dark Electro, but I enjoy music of all kinds.

What’s your advice for young artists, photographers and designers entering the field?

To allocate more time for creativity and to be patient.

What are your future plans?

I plan to have a few dark-photo projects with special makeup, design ideas and art. And I’m going to make series of figures on a fantasy theme.