Curling Comes to the Capital

By Askar Beisenbayev in Sports on 20 February 2013

ASTANA – This year, one of the most modern ice rinks on the continent hosted the first curling tournament in the history of Kazakhstan’s capital city Astana. Managers of Alau Ice Palace and specially invited curling experts from Omsk, Russia were the first players to slide stones across the rink’s smooth surface. 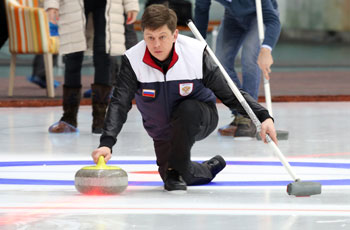 “First, we conducted a test-drive, evaluating the ability of the palace to become a centre of curling in real conditions. Alau is an ultra-modern complex, and we have no doubt that in technical terms it fully provides for the needs of a sport like curling,” Alau Director Nail Nurov said.

“Preparing ice for curling is a special art. It needs high-quality purified water, which is frozen strictly at minus five degrees. The surface then has to be maintained at the same temperature. Alau provides all necessary conditions for that. The only thing to be done is to make professional markings,” Omsk Regional Curling Federation Representative Igor Pasechnik said.

The managers of the ice palace intend to promote professional and amateur curling. This year the exotic sport will be available to local citizens.

Curling is an Olympic sport and is included in the eight compulsory winter sports of Universiade in 2017 in Almaty. Thus, its appearance is fully consistent with the emergence of the concept of Alau, both in terms of professional sports and mass accessibility.

The Curling Association was created in Kazakhstan in 2003. The first “chess on ice” tournament was held in Almaty in March 2004, but in the capital this sport was not popular. The managers of the ice palace decided to correct this omission and promote curling in Astana.

Today, negotiations regarding hiring professional coaches are underway. Most likely they will be experts from Eastern Europe. In the near future it is planned to organise ice-making training to ensure that surfaces are always in accordance with international standards.

In summer the curling sheet will be marked up and equipment will be purchased; this autumn the first curling club will be opened in the capital.