By Mariam Turezhanova in Business on 6 February 2013

ASTANA – Kazakhstan has been praised for its improved business climate in a World Bank report released last year. The Kazakhstan government discussed the report in its January 22 meeting and explored ways to maintain the progress. 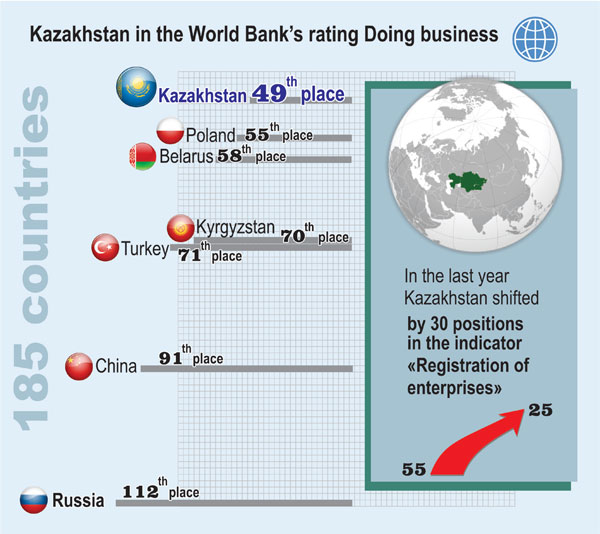 The report, called Doing Business in 2012, rated Kazakhstan No. 49 among the 185 nations assessed in it, putting ahead of China at No. 91, Turkey at No. 71, Poland at No. 55, Russia at No. 112, Belarus at No. 58 and Kyrgyzstan at No. 70. The report also praised the government of Kazakhstan for taking steps that significantly improved the business climate in 2012.

This progress “is the result major efforts the government has made to improve the business climate,” Economy and Budget Planning Minister Yerbolat Dossayev told the government.

“Kazakhstan has climbed 30 places on the World Bank’s Enterprises’ Register from No. 55 to No. 25 due to the simplified procedure we have introduced for setting up new businesses and ending the requirement that a fixed capital sum must be guaranteed for three months after the registration,” he said.

Kazakhstan now ranks No. 55 on the World Bank’s “resolution of insolvency issues” listing thanks to recent reforms. These include accelerated rehabilitation proceedings, expanding the powers of the liquidator and requiring improved qualifications for this role.

The World Bank report documented Kazakhstan’s progress in reforming its tax codes to encourage its private sector. In 2009, the country ranked No. 61 in this area, but by 2012 it had risen to No. 16.

However, the government noted that Kazakhstan still ranked poorly on other business indicators in the World Bank report. It was only No. 155 on providing private businesses official permits for construction and it rated even lower at No. 182, the fourth ranking from the bottom, on the report’s volume of international trade index.

However, Dossayev also noted that Kazakhstan’s poor international trade rating in the report also reflected its historically isolated position in the heart of Eurasia. “There are objective reasons for the low rating in this area, such as the country’s unfavourable geographical position,” he said.

However, Prime Minister Serik Akhmetov noted that some of the shortcomings listed in the World Bank report such as the difficulties in obtaining building construction permits could not be explained or excused by the country’s geographical location. That problem “could be hardly justified by our status of a landlocked country,” he said.

Serik Nokin, the acting chairman of the committee for construction and housing of the newly established Ministry of Regional Development, agreed with the prime minister. “Kazakhstan could have taken more advantageous positions in the international rating if some innovations in the construction industry had been introduced in 2012,” he told the government.

Reforms were being made and if they had been carried out sooner, Kazakhstan’s already impressive listing would have dramatically improved further, Nokin said.

“The government has now eliminated requirements for permission to use land plots for construction, for the approval of the completed buildings and for independent technical supervisors,” he said. “Due to these changes, the time required for obtaining building permits has been cut by 53 days and the costs of the process have been reduced by 800,000 tenge.”

If these reforms had been implemented early enough to be included in the World Bank’s assessment, “Kazakhstan could have risen 53 places higher in the report,” Nokin said.

“The construction sphere as a whole needs systematic measures,” he said.

Finance Minister Bolat Zhamishev said the government was streamlining its procedures for regulating imports and exports and expected these reforms to boost international trade.

“In 2012, the (finance) ministry developed a new electronic information system for exports that has already been tested in the regions of Kostanay and Karaganda,” he said. “In the second half of 2013, the ministry will begin a trial run of its electronic system to register imports too. This will reduce the costs associated with international trade.”

Zhamishev also told the government that a new integrated information system was being developed to monitor and facilitate international trade called the “Single Window for Export-Import Operations.”

“In 2012, a feasibility study for this project was approved and in the second quarter of this year (April-June 2013), work will start on implementing it,” he said. “In the fourth quarter (October-December) of 2013, we plan to purchase the licensed software and hardware needed to operate it.”

Zhamishev said the volume of Kazakhstan’s international trade depended on the activity of 14 government agencies covering more than 50 official procedures. Over the next two years, all these procedures will be computerised and all licenses and official authorisations could then be applied for and approved online, he said.

Zhamishev said the new online single window would provide the integrating tool that would allow foreign companies to significantly reduce their costs in obtaining licenses and permits to do business in Kazakhstan.

Industry and New Technologies Minister Asset Issekeshev told the government that new measures had been introduced to improve the population’s access to the national electric power grid. In 2011, Kazakhstan ranked No. 84 in the World Bank ratings in this area, but in 2012 it moved up to No. 80.

Issekeshev said his ministry planned to streamline its process for issuing permits by automating the procedures and making the issue of new permits available through public service centres to connect applicants to grids with a capacity of more than 100 kilowatts (Kw).

The Industry Ministry would make application procedures available on the Internet. He said the time period for assessing technical conditions for approving applications to receive access to the national power grid would be reduced to five-to-seven working days for electric power services up to 100 kW and to 10 days for services up to 100-to-1,000 kW.

After hearing Issekeshev’s report, the prime minister said the government was also considering the future development of the power industry.

“However, in addition to the above issues we have a big problem – the question of networks, which needs drastic measures. New legislation on the development of the market for electric power will help to solve it,” he said.

Bissengali Tadzhiyakov, deputy chairman of the National Bank, told the government that the World Bank report also confirmed that Kazakhstan still fell behind other nations for providing loans to businessmen. Kazakhstan ranked No. 83 on the World Bank list in this area.

However, Tadzhiyakov said this situation would be improved through changes in the law on the recovery of competitive enterprises. He said measures would also be taken to improve the legal basis for restoring companies from states of bankruptcy, on business insurance, Islamic finance and on encouraging the growth of microcredit organizations.

Kazakhstan ranked very favourably on the World Bank ratings for protecting investors at No. 10 out of the 185 listed nations.

Deputy Prime Minister Yerbol Orynbayev told the Cabinet that the government had created five permanent working groups to coordinate measures to improve the country’s ratings on the relevant World Bank listings. He said the government had already approved an action plan for 2013 and was holding consultations with the World Bank on a regular basis to ensure that all new measures met international standards. The prime minister then instructed ministers and heads of state agencies to continue their work on improving conditions for doing business in the country.