By Natalia Ryzhkova in Nation on 6 February 2013 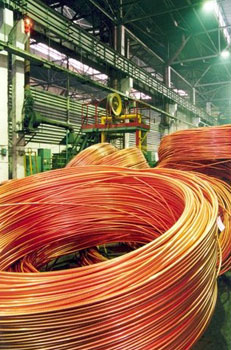 The copper welding plant in Zhezkazgan is a source of livelihood for the town’s residents.

ZHEZKAZGAN – The socioeconomic growth of eight industrial settlements in the Karaganda region is directly associated with the state programme of single industry towns’ development. Each of them was formed as part of the infrastructure of backbone enterprises. Thus, the smelting and mining enterprises of Kazakhmys Corporation have from the start been the economic platform for the towns of Zhezkazgan, Balkhash and Satpayev.

The change in Kazakhstan’s copper capital in the past year is connected to the Comprehensive Plan of Socioeconomic Development of the towns of Zhezkazgan, Satpayev and the Ulytau district for 2012-2017. The most successful solution to everyday problems in these single industry towns is the upgrading of the Zhezkazgan heat power station (HPS) and the overhaul of equipment, in which the Kazakhmys Group in 2012 invested 3.6 billion tenge.

For 60 years, the station, which employs 700 people, has been providing electricity and heat to the population and industrial processes of Zhezkazgan, annually producing on average more than one billion kW/h of electricity and more than one million Gcal of thermal energy in the form of steam and hot water. In the future they plan to renovate to increase production volume and capacity from 207 MW to 220 MW.

To foster the sustainable development of the town, the regional akimat (city government) and Kazakhmys LLP signed a memorandum on cooperation for 2013, according to which the corporation will allocate funds for the restoration of the main water pipeline in Zhezkazgan and for financial assistance to veterans, among other social projects.