Champion for the Disabled

Astana – Since the age of five, when Ali Amanbayev was diagnosed with a serious spinal injury, life has been a constant struggle. 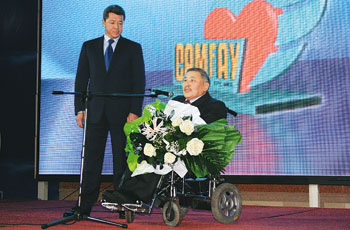 Ali Amanbayev is the champion for the rights of the disabled.

“As a schoolboy, I began using crutches and had to do my homework lying on my back,” he recalls. “As the years passed, I realized that life would only become more difficult. It is not easy being disabled in a society with limited social support systems.’’

But attitudes and mindsets are slowly changing in Kazhakstan. Today, at 65, Amanbayev leads the Kazakhstani Union for the organization of People with Disabilities. This summer, when he was appointed adviser to the Minister for Labour and Social Protection, he became the first person with a disability to hold this highly-ranked position in Kazakhstan.

This flagship appointment came as no surprise for Amanbayev, who has watched the rights of the disabled flourish recently in Kazakhstan. Since 2008, UNDP has been working closely with the Ministry for Labour and Social Protection to support the rights of people living with disabilities. As a result, the country’s social protection system has been extended to include 500,000 disabled people.

With UNDP support, a number of non-governmental organizations (NGOs) also stepped up their lobbying efforts to appoint a person with a disability as an adviser to the Government. Amanbayev’s eventual appointment to the job marked a crucial signal of fundamental change.

UNDP, in partnership with the Government, also produced a National Human Development Report that, for the first time in any Central Asian country, advocated an end to exclusion and the promotion of equal rights for those with disabilities. The Report drew a lot of publicity and media attention.

Thanks in part to UNDP’s advocacy, Kazakhstan signed the International Convention on the Rights of Persons with Disabilities and its Optional Protocol in 2008.

More recently, UNDP has been working with the Government to promote national disability policies and the establishment of basic support services, such as opportunities to receive college degrees though distance learning, in addition to jobs training and rehabilitation services.

Improving social services With UNDP’s advice, Kazakhstan has amended key laws to improve social services for vulnerable groups, with special attention given to those with disabilities.

As a result, US$200 million of government funding has been allocated, allowing over 2,000 people with disabilities to receive special services. Amanbayev now has his own personal assistant who helps him in his wheelchair around the city and within his own home.

These days, more than 7,000 disabled people in Kazakhstan receive these critical services. “It’s made such a difference,” Amanbayev says of his assistant. “He’s the extra oomph to help me face the challenges of each day.”

These days, Amanbayev and other NGO leaders are busy lobbying the Ministry for Transport and Communication to revise standards for providing the disabled access to public spaces and public transportation. As a result, Amanbayev was invited to take part in several hearings and meetings at the Ministry, where he convincingly pointed out the urgent need for change in a country where such standards lag far behind the international norm.

The Ministry has reacted, promising to make all railway platforms and trains accessible for wheelchair users within the next two years.

“You can’t imagine how vital this is,” Amanbayev says. Improving transport infrastructure is just one part of a wider national campaign to provide inclusive access to public spaces. This is bringing fundamental change to Kazakhstan, where more than 70 percent of public infrastructure is inaccessible to the disabled. With UNDP’s help, the Government is surveying the accessibility of public buildings and services and making cost estimates for necessary upgrades.

Since its inception, UNDP’s programme has been successful at raising public awareness and fostering a culture of inclusion for those with disabilities. In addition to a short film, photo exhibitions and national and international conferences, over 5,000 copies of the UN Convention on the Rights of Persons with Disabilities have been distributed to major public institutions, libraries and universities.

The author is a Communications Associate in UNDP Kazakhstan.
This article was first published in The Development Advocate
in January 28 2013.