ASTANA – Winter in Astana has its charms: fresh cold air, sun and deep blue skies, all of which call residents and visitors outdoors despite the cold. Now the capital is adding ice skating to its list of winter charms. New ice rinks and entertainment venues are being constructed all over the city. Astana doesn’t have much for skiers, so ice rinks don’t have much competition in drawing winter sports enthusiasts. The rinks will function from December 12 until the end of April, when the sun is finally strong enough to melt the ice.

Astana offers both indoor and outdoor skating. Indoor rinks are located in big malls and entertainment centres, where in addition to skating visitors can enjoy a cup of coffee, tea and desserts.

Outdoor rinks are open only during the winter months and are constructed on the frozen Yessil and Akbulak rivers. There is also a skating rink in the centre of the old city, next to Cine Tempore Mall.

Locals love the outdoor rinks. The prices are reasonable and the wind does not allow you to stand still. You’ll have to skate to keep warm, no matter what your skill level. Photos with the ice sculptures around the rinks are must-have winter holiday souvenirs from Astana.

Astana has a total of five skating rinks: in the Central Park, next to Duman Aquarium, on the Akbulak River, in Zheruyik Park and on the Yessil River opposite Samal Microdistrict. 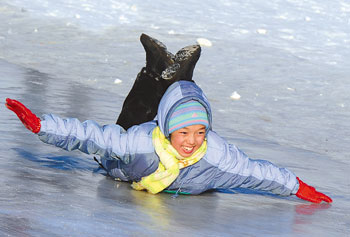 For the convenience of visitors, it is possible to rent skates next to the rinks. Visitors can also enjoy warm dressing rooms, buffets with hot tea and music and a skate-sharpening service for serious skaters. Skate rentals are 500 tenge (about $3.30) per pair per hour. Nearby snowmobile riding costs 1,000 tenge ($6.60) per lap.

“Many people are willing to go skating. We have in total 200 skates for hockey and for figure skating. We also have snowmobiles and skis. We have so many visitors, sometimes we run out. To date we expect to work prior to the beginning of March,” Zhazilbek Kanseitov, administrator of the ice rink on the Yessil River, says.

The ice skating rink in the old city occupies 1800 square metres and is equipped with seating for 600. There are snack bars, big screens for showing entertainment programmes and a medical centre. Missing this winter are ice towns, which didn’t make the economic or aesthetic cut for 2013.

“The ice rinks for the city have become a traditional place for leisure and sports activities for the public and for the guests of the city, so this year we have organised traditional large rinks in three parts of the city to help serve all the sports-loving population. The rinks have all the safety equipment and other infrastructure visitors would want at a skating rink,” Deputy Mayor of Astana Vasiliy Krylov said.