By Marzhan Imanbayeva in Nur-Sultan on 20 February 2013

ASTANA – From the Louvre to the cuisine to the language, Kazakhstan has declared 2013 the Year of France in Kazakhstan and has 12 months of events planned to celebrate and strengthen ties between the two countries. One of these, the international France and Kazakhstan Exhibition, opened on February 16 at the Hall Astana Artline in the new Students’ Palace. 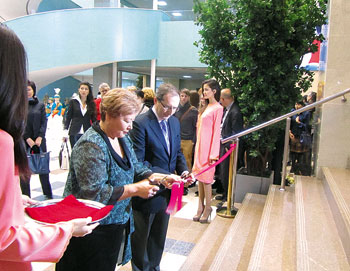 Asima Bimendina and Jean-Charles Berthonnet cut the ribbon at the official opening of the exhibition.

“This is a special year in the history of Kazakh-French relations,” said Head of the Astana City’s Education Department Asima Bimendina. “This event is about friendship and mutual understanding between the two nations; it is a great joy to show the wealth and inheritance of our cultures. I want to thank our famous artists whose works are exhibited here today.”

Bimendina presented to French artist Martine Rivasi-Offant the Letter of Gratitude for her contribution to the development of cultural relations between the two countries.

French Ambassador to Kazakhstan Jean-Charles Berthonnet opened the exhibition with Bimendina by cutting the red ribbon.

The exhibition presents the work of Rivasi-Offant and of well-known and emerging artists and sculptors of Kazakhstan, including Umsyn Arkabayeva, Director of the Students Palace and a member of the Artists Union of Russia and Kazakhstan, as well as Armat Bektas, Yerlan Nazarkul, Gulmira Telgoziyeva, Yerkinbek Yessimov, Yeraly Dosmaganbetov and Zhannet Abish. Works displayed represent diverse genres including still lifes, portraits and landscapes.

Armat Bektas presented his “philosophy of the steppe,” the philosophy of its linear structure, dictated by the space of the steppe itself. With mythical characters and ethnic symbols, Yerlan Nazarkul created a completely new direction in art—a three-dimensional image in the postmodern style. Gulmira Telgoziyeva demonstrated a deep spiritual world. The sculptures of Yerkinbek Yesimov tell the history of their ancestors, of its traditions. Yeraly Dosmaganbetov used a warm colour palette to show the identity of steppe culture, the romance of daily life.

Martine Rivasi-Offant has been living in Astana for the past three years because of her husband’s job. It has affected her work: in a remarkable manner, the artist conveys the beauty of Kazakhstan’s land: vast steppes, Astana cityscapes and views of snow-covered Borovoy. She was particularly impressed by a visit to Tengiz Lake, where she saw the lake’s amazing pink flamingos. 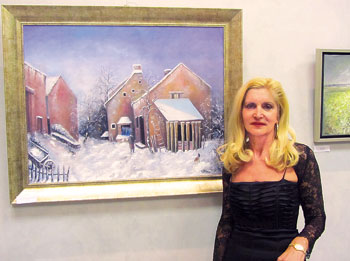 Martine Rivasi-Offant poses in front of one of her creations.

“This is my fifth exhibition in Kazakhstan. I’ve had two personal exhibitions. We organised my first show in 2010,” she recalls. Her long stays in Paris as well as several years spent in Norway and later in Kazakhstan have shifted her artistic expression more towards introspection.

“Central Asia is an endless, harsh, hard landscape, but it is unusual for an artist to draw it. Kazakhstan landscapes are gorgeous, like they’re asking to be painted. This feeling of human facing the infinite is fascinating. I had never seen such an endless and open steppe. And the steppe helps me to express it. Steppe inspires me at any time of the year, in winter and autumn. Snowy steppe – it is like a blank canvas, about which every artist dreams. For a painter, it is fantastic experience. In winter, the bright colours of nature disappear and a white space remains. Gray, yellow and white colours only increase the depth and spirituality of the local nature,” the French artist said to The Astana Times.

A lawyer by education, Rivasi-Offant has been drawing for more than 15 years. The artist is actively involved in the cultural life of the capital, showing her paintings in various galleries. Rivasi-Offant’s portraits and landscapes, done in pastels, watercolours and oils, have been exhibited in many famous galleries and salons in France, Australia and Norway. She has won multiple awards and prizes.

The France and Kazakhstan exhibition will last until the end of February.