By Miras Abykov in Sports on 6 February 2013

ASTANA – On February 1, the Astana Arlans boxing team continued their run of unbeaten tournaments and KO-ed the American Knockouts. 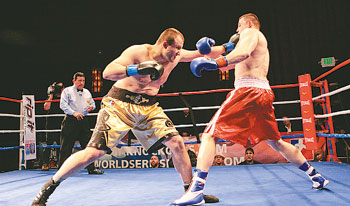 Astana Arlans boxing team continued their run of unbeaten tournaments and KO-ed the American Knockouts. Their next match is against British Lionhearts on Feb. 7.

In the first fight, Kazakhstan’s Ismail Akhunov beat American Braulio Avila Juarez, who failed to match his punching and lost all five rounds.

In the lightweight division, 25-year-old Samat Bashenov defeated Juaquin Chavez who could not match his skill and speed.

Konstantin Snigur beat young William Williams in the middleweight division with a technical knock-out (TKO), ensuring an overall victory in the tournament for the Arlans.

Astana’s Ehsan Rouzbahani from Iran defeated Jamel Reynolds by another TKO in the light heavyweight division thanks to his combination punching. In the summer, Rouzbahani reached the quarter-finals of the London Olympics.

The Arlans will now travel to London to meet the British Lionhearts on February 7.