By Maral Zhantaykyzy in Tourism on 20 February 2013

ALMATY – An unusual new travelling café in a restored tram has become a hot stop for dating couples and proposals of marriage. 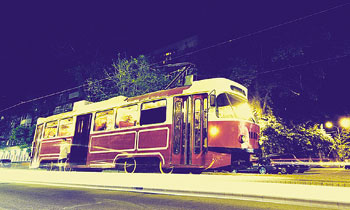 The tram café is attracting romantic couples, friends and families who seek an interesting time out. (photos by www.yvision.kz)

The tram café travels on a regular route and daily schedule around the city of Almaty. But its passengers sip coffee and drink champagne, savour quality desserts and even listen to soft music as they ride around town enjoying the sites outside and the soft, ambient lighting within.

The café opened in May 2012 and was an immediate success: It is always packed with customers and has already generated dozens of enthusiastic Internet reviews, making it a magnet for tourists.

Three Almaty friends who went to university together created the café. Bakhtiyar Sadvokasov, Nurken Duysembekov and Pavel Grebennikov all attended KIMEP, the Kazakhstan Institute of Management, Economics and Economic Prognosis. Located in the centre of Almaty, it is a leading independent North American-style academic institution in the Commonwealth of Independent States (CIS). The three did everything together, from studying for exams to playing sports and even making parachute jumps.

Sadvokasov, Duysembekov and Grebennikov started out with no experience in the restaurant business and they knew nothing about trams. But they had their vision, or high concept. And thanks to the support and help of their families and friends, they succeeded in taking out a lease on an old, decommissioned tram. It was a vintage 1976 Tatra T3D that had previously served the town of Chemnitz in Germany.

In 2004, the tram was originally purchased by the city of Almaty for its tram route No. 6. It took the three friends more than six months to refurbish it for its new role. They did most of the repair work, including the repainting, insulation and interior design themselves. 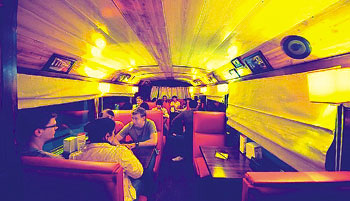 The tram travels on a regular, fixed schedule. It starts from a bus stop at Shvechenko-Kunayev, travels along Baitursynov and Makatayev streets and finally returns to its starting point. The journey takes two hours. Every day except Monday, passengers buy their cups of coffee and line up for their trip at exactly 8:30 pm. The tram café is open for customers until 4 am. It can carry 25 passengers on every trip.

The menu includes fresh bread and desserts from the French patisserie La Tartine, snacks from the restaurant La Grenouille, sandwiches, Japanese sushi, champagne and other drinks and cocktails. The three owners make the gourmet coffee themselves. They learned to do so at bartender’s courses.

The business quickly proved a success and the owners hired two new drivers and three waiters, giving themselves time for their families and other business projects. However, they still try to serve their customers personally and maintain good service and a friendly atmosphere.

Other businessmen have offered Sadvokasov, Duysembekov and Grebennikov $250,000 to buy the place but they are not interested in selling it. Instead, they plan to franchise the idea in other locations and other cities.

The café has become a favourite romantic destination and a popular location for marriage proposals. The owners and staff are happy to work with customers to plan romantic surprises for their loved ones. And they have already developed a loyal clientele. As the owners say, “every visitor will find in our tram his or her favourite table.”

The idea of a coffee shop in a tram is new to Almaty and Central Asia. But it is already a common sight in the cities of Belgium, Italy, Russia, Poland and the Czech Republic.

Now, the café on wheels has become Almaty’s latest beloved landmark. It looks set to serve the city for many years to come.