Almaty is establishing itself as Central Asia’s business, tourism and transportation hub.

“Kazakhstan today has a thriving economy, governed by consumers, not plans. With material improvements, the city has also developed a well-deserved pride and self-confidence,” said Thomas Mirow, president of the European Bank for Reconstruction and Development at the EBRD annual meeting in Kazakhstan in May 2011.

As the largest city in the country and the nation’s capital at its independence in 1991, it was inevitable that the success of those policies would transform Almaty into a major transportation hub and regional centre for visiting foreign businessmen and investors.

“We have been developing Almaty as a large business and financial centre, promoting tourism and services,” President Nursultan Nazarbayev told a meeting of the Council of Foreign Investors.

“Almaty has great potential for further development as a financial centre of the Central Asian region,” said Carolyn Browne, Britain’s new ambassador to Kazakhstan, during a meeting with Almaty Mayor Akhmetzhan Yessimov.

Mayor Yessimov said Almaty was not only the largest city in the country, but also its business, financial, cultural, innovative and educational centre.

“This city is the largest contributor to Kazakhstan’s budget and the most attractive region for foreign investment,” he said.

Kazakhstan’s modern banking system developed under difficult conditions. When Kazakhstan was still a Soviet Socialist Republic, the banking system was introduced in branches of the State Bank and the Industrial Bank and, later, as branches of other banks. Today, the Russian and Kazakh banking systems still share several common features, but there are fundamental differences.

Banks in Kazakhstan have experienced a lengthy period of political stability and economic growth. Together with a rational approach to banking and finance policy, this has helped propel Kazakhstan’s banking system to a higher level of development. Banking technology and the personnel qualifications required for working in banks are stronger in Kazakhstan than in Russia.

• The National Bank of Republic of Kazakhstan (NBRK) which is the state bank.

• The second-tier banks, which include a range of state, private, joint stock, combined and foreign banks.

The law defining the functions of the National Bank established it as the central bank of Kazakhstan and the highest authority for banking in the country. The National Bank is a legal body possessing separate properties.

There are 38 commercial banks operating in Kazakhstan, and most of them have their headquarters in Almaty. They function as multidisciplinary credit institutions and are a key link in the credit system. 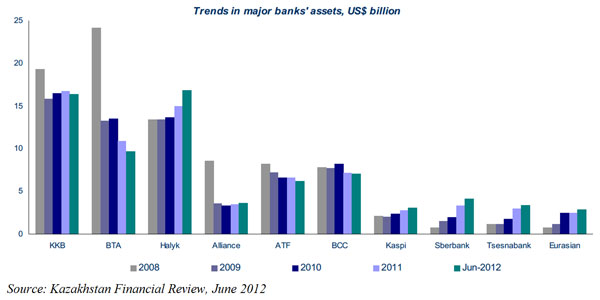 The global financial crisis of 2008-2009 was a major test of Kazakhstan’s financial system. The country’s banking and real estate sectors were particularly exposed to the adverse impact of the global turmoil. Kazakhstan’s economy, however, endured these challenging times in a resilient manner and continued to grow. It recorded GDP growth of only 1.2 percent in 2009. However, this returned to pre-crisis levels of 7.3 percent in 2010 and 7.5 percent in 2011.