By Azat Peruashev in Editorials on 6 February 2013

President Nursultan Nazarbayev’s latest State of the Nation address on Dec. 14, 2012, announced the new Strategy 2050. It has opened new horizons and opportunities for the people of Kazakhstan over the next 40 years. The president presented a new vision for the development of the country to the year 2050 and potentially beyond. 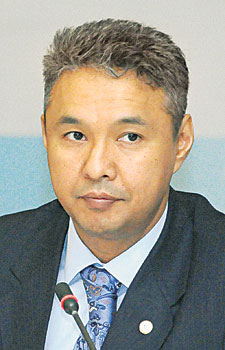 The Ak Zhol party recognises the historical importance of the new policy.

The new strategy follows a course of economic pragmatism in its liberal tax policy. Ak Zhol welcomes this move as we have urged the government to modernize existing tax policy for the benefit of national industry.

We know that almost all the nations in the European Union and most member states in the World Trade Organization use differentiated sector value-added tax rates (VAT) along with general rates. Thus, in the same country, the general VAT rate may be 20 percent to 25 percent, but it may be as low as zero for agriculture and only 3 percent to 5 percent for the food industry.

However, under the current tax system in Kazakhstan, the agriculture, food, light industry, machinery and pharmaceuticals sectors still pay two to three times the proportion of taxes relative to their earnings than their competitors do in European Union nations. The embassies in Astana of Spain, Sweden, Britain, Romania, Germany, Slovakia, Austria, Netherlands, Lithuania, Bulgaria and other countries have confirmed to us the use of that practice.

At the end of December 2012 during the discussion of amendments to the tax code, I proposed introducing a similar mechanism in our country. However, the Ministry of Finance rejected that amendment.

This Ministry of Finance position directly contradicts paragraph 3.2 of President Nazarbayev’s state-of-the-nation address unveiling the new Kazakhstan 2050 national strategy. There, the president say, “We must introduce a favourable tax regime for those employed in areas of production and new technologies … We must conduct a revision of all existing tax preferences and maximize their efficiency.”

Therefore, the Ak Zhol party intends to pursue similar initiatives and to extend their list and range of application. In particular, we think it is necessary to study closely the proposal to replace VAT with a sales tax that would be extremely beneficial for the manufacturing industry.

This would end the need for VAT recovery for the export of our raw materials to foreign companies and owners, which is required under the current system of the taxation on domestic small and medium-sized enterprises (SMEs). If I am not mistaken, nowadays we must return more VAT revenues to the raw material suppliers than we collect from the processing industry.

That is why, if we are going to keep VAT recovery, then it should be applied only to the export of products from the agricultural sector and the processing industry, but not on those businesses that simply export our natural resources for further resale.

The Ministry of Finance has rejected proposals to cancel the pseudo-entrepreneurship of state-owned companies competing in the private sector. In the Ak Zhol party, we will continue to call for the reduction of terms for the limitation of actions in tax disputes from five to three years and for the cancellation of taxation on recently established small and medium-sized enterprises (SMEs), or businesses for the first three years from the date they were started. The Ak Zhol party will continue to present these and other amendments to reform the tax system to encourage private businessmen and to bring financial relief to existing SMEs.

The Ak Zhol party also welcomes President Nazarbayev’s instruction about changing the government’s role in the economy and reduction of state participation in the market.

Unfortunately, today many joint stock companies, limited liability partnerships and national state companies are forced to compete against state enterprises which drive out private business and create difficulties for their existence, using state budget and advantages in the national procurement system. We clearly understand that under these conditions private companies will not be able to compete with state-owned companies which are not financially responsible for their own economic performance because they have direct government support.

At the beginning of the 2008-9 global financial crisis, there was a widespread tendency around the world for governments to intervene more actively in the economy. That has happened in Britain, Germany, the United States and other developed countries. It has also happened in Kazakhstan with the result that the number of quasi-governmental sector companies has grown by 10 percent or more annually. The share of the private sector in the competitive market has fallen by a similar amount.

We see that not only has the government entered more directly into business activities, but there has also been an increased commercialisation of state services that are paid for by citizens and private businesses through the taxes they pay to the state.

One example of this process: Ort Sondirushi is a subsidiary company of the Ministry for Emergency Situations (MES). It has commercialised such services as fire protection, emergency-rescue services, mountain rescue operations and emergency medicine that should be performed by the ministry itself on a non-commercial basis as part of its official responsibilities.

Due to such decisions, citizens who should be receiving these services from the government in return for the taxes they contribute are forced to pay a second time for them. And the government itself also loses because such companies are usually run in an uneconomic manner and at large losses. Therefore, their financial viability is extremely low.

Thus, the Ort Sondirushi Company does not provide any visible economic benefits to the government. Having a dominant position in its market niche, this company nevertheless only generated an income of 53 million tenge recorded in its official published financial statement for 2010 despite an annual turnover of 4 billion tenge. Therefore, its annual official profitability is only 2 percent.

Also, the exceptional authority given by the government to such state-owned companies creates considerable room for the abuse of authority.

Today, a new draft law on civil protection has been submitted to the Majlis for consideration. It includes an attempt to define in law the monopoly position of this so-called “non-governmental fire-fighting service.” However, such attempts, in our opinion, directly contradict the tasks set by the president in his latest national address.

In the second section of his address on the comprehensive support of entrepreneurship, President Nazarbayev demanded a change of the role of the government in the economy: “Private businesses are normally more effective than state run enterprises,” he said. The president, therefore, called for the handing over of all nonstrategic services and companies to private hands. This will be a fundamentally crucial step in strengthening domestic entrepreneurship.

Therefore, we are interested in studying the best international practice regarding limitations of the governmental intervention in the economy and of official support for free market initiatives.

The Ak Zhol party also supports the instructions of the president about modernizing the country’s foreign policy. In its 21 years of independence, Kazakhstan has become a prominent and important member of the world community. All the most important participants of the international investment market know our economic potential.

Therefore, it is not sufficient for us today just to declare our existence. The time has come to understand and directly define foreign policy as a tool for the advancement of the national interests of the country.

The establishment of the Eurasian Economic Union as defined by President Nazarbayev should be the main goal in this policy.

For the first time, the president used the term “economic” to describe the nature of the Eurasian Union. This clearly implied a reconsideration of the role and meaning of the new union in contrast with the previously-declared project of simply a Eurasian Union. Therefore, it was no accident that President Nazarbayev emphasized that the political sovereignty of Kazakhstan would not be infringed during the union’s integration process.

For the Ak Zhol party, this is a key issue. We have warned repeatedly for several months that there is an ongoing effort to influence our national legislation by our partners in the Customs Union and Common Free Market Zone (CFMZ).

These concerns were raised by Ak Zhol members of the Majlis during discussions about adjusting excise rates and VAT levels to those in the Russian Federation. We considered these proposals to be steps taken under pressure from Russia and for the benefit of Russia but against the benefit of the economy of Kazakhstan.

The ideas of establishing a supranational parliament and board of ministers over the Custom Union have been extensively discussed in the Russian media and the Internet lately. We strongly disagree with these proposals and see them as an attempt to influence our political sovereignty. The principles set out by President Nazarbayev in the Strategy 2050 on maintaining the priority of the national interest to define foreign policy will be supported by the Ak Zhol party in every possible way.

The final goal of serious business policy cannot be just about money. Business has a meaning and clear perspective in one case only, if it is directed towards improving people’s lives, developing the country and the economy and the narrowing the gap in living standards between the rich and the poor.

The national intelligentsia plays an important role in formulating this understanding, as the president recognized in his national address.

The eve of Independence Day marked 95 years since the first Kazakh government, the Alash Orda, was established in December 1917 by representatives of intelligentsia and property owning citizens. Members of the Cadet party in the Russian State Duma had elected some of them.

The intelligentsia forms and influences the liberal thoughts of society. It acts as an ethical criterion of justice and it creates new heroes in the national consciousness.

That is why the Ak Zhol party will actively support any initiatives to improve the social status and role of the intelligentsia. A practical step would be to follow the European Union experience in this area. In many European countries such as Sweden, the Netherlands and Slovakia, the publication of books and creative literature is encouraged by reducing taxes on their sale to only one half or one third of the general VAT rate of 6 percent, at least for works published by the Writers and Journalists Association and other creative unions.

An important and practical challenge in implementing the 2050 national strategy will be the consolidation and enforcement of the role of Parliament in the system of government power and establishing the rights and functions of parliamentary minority parties.

The Ak Zhol party is preparing new proposals to meet this challenge and we will be studying successful practices in other countries.

These are only a small number of the questions we would like to discuss regarding the president’s national address.

Now that our party was elected into Parliament in the 2012 elections, we have a unique opportunity to participate in implementing the president’s historic strategy and bring our own new contributions to it.

This is a chance to contribute something new to our nation.

The author is chairman of the Ak Zhol party. He has been a member of the Mazhilis, the lower chamber of the Parliament of Kazakhstan, since January 2012.