Youth Choose Books to Be Translated into Kazakh

By Bektur Kadyrov in Culture on 23 January 2013

ASTANA – In the National Academic Library, the youth wing of the Nur Otan political party, Zhas Otan, has announced the launch of a nationwide Internet campaign among the nation’s youth to identify 100 books they’d like to have translated into the state language. 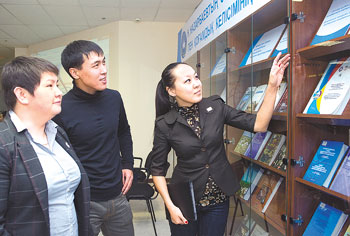 Translating books into Kazakh is seen as a way to help the state language grow and develop.

In the annual state of the nation address, President Nursultan Nazarbayev announced the innovative idea to ask young people across Kazakhstan to identify the top 100 modern books they find interesting.

In order to complete the task, members of the Zhas Otan party have created a large-scale campaign called Kel, Zhastar, Okylyk (“Let’s read, youth,” in Kazakh). Prior to launching the campaign, Zhas Otan will design a competition based on the selection of books and will create a working group, which is expected to involve leaders and activists of youth organizations, young students of historical linguistics and prominent bloggers.

Deputy Director of the National Academic Library of Kazakhstan Galiya Isakhanova recently discussed declining reading rates. According to statics, young people make up about 70 percent of readers; however they generally read textbooks or other educational books. Great efforts are being made to promote reading. They include open subscriptions for the provision of books to be taken home (a traditional practice, which was abandoned in the past), the effective campaign “One Country – One Book” and the “Cultural Heritage” programme. The programme regularly carries out translations of world classics into Kazakh. However, instead of Shakespeare, Balzac and Tolstoy, young people ask for Murakami or the “Harry Potter” series. And translated books are published in small batches, which does not contribute to the development of the campaign.

The need to educate the younger generation gave rise to the impetus to translate books that will appeal to them. But it is not as easy as it seems: copyright issues, the law of succession, financing and placing orders for translation and publication and many other challenges face the translation campaign.