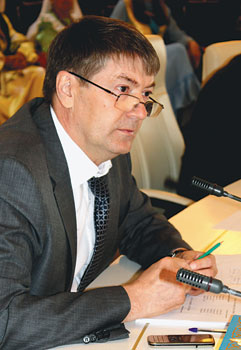 Taufik Karimov, president of the Association of Tatar and Bashkir National Cultural Centres (ATBNCC), said his organisation recognized the importance of the project and was giving it full support.

“The contribution of Kazakhstan to strengthening the regime of nuclear weapons non-proliferation is a definitive contribution to world stability, order and security,” Karimov said. “The Association of the Tatars and Bashkirs has always supported the initiatives of President Nursultan Nazarbayev and now we are going to participate in the realisation of The ATOM Project, which is extremely important for all humanity.”

From 1949 to 1989, half of the nuclear tests carried out in the world took place at the Semipalatinsk nuclear test site and more than 1.5 million people suffered serious and often fatal health problems from radiation fall-out, including many Tatars and Bashkirs.

The ATOM Project seeks a final and irrevocable ban on nuclear testing. It urges the international community to sign an online petition to put an end to nuclear testing at www.TheAtomProject.org and urges all governments to permanently abandon nuclear weapons and to achieve the early entry into force of the Comprehensive Nuclear Test Ban Treaty.

“Our association intends to promote the project in two directions,” Karimov said. “First is the promotion of the project by the participants of the Tatar-Bashkir Community in the work of the ethno-cultural communities that make up the association. The Tatars and Bashkirs of the Semey, East Kazakhstan, Karaganda and Pavlodar regions have already confirmed their readiness to promote the project. Initiatives connected to it will be presented to regional mayors and local government assemblies.”

“Our activities will also have an international dimension,” Karimov said. “Since the Association of the Tatars and Bashkirs is a member of the World Tatar Congress uniting compatriots from New Zealand to Canada, we will lobby on behalf of The ATOM Project through our associate members around the world.”

“President Nazarbayev has clearly stated the need to take further decisive action to eliminate the nuclear threat. Our members recognise the urgent need to support his initiative,” Karimov said.

Karimov also said the president’s new Strategy 2050 announced in his annual address to the nation in December was popular among Tatars and Bashkirs.

“The president’s December address has evoked a warm response from the whole population of our large multinational country, including the Tatar and Bashkir ethnic groups,” he said.

The dialogue of cultures and religions in the multinational country, which has become home to peoples from 140 ethnic groups and 17 religious faiths, has been one of its greatest recognized achievements.

“The president pointed out that we must learn to live in the coexistence of cultures and religions and that, therefore, we must be committed to the dialogue of cultures and civilizations. The Tatar and Bashkir communities recognise this,” Karimov said. “We understand that only in dialogue with other nations, will our country will be able to continue achieving success and influence in the future,” Karimov said.

“Since our country achieved national independence 21 years ago, social harmony has been the main precondition for achieving its other economic and social goals,” Karimov added. “Now, President Nazarbayev has set a new task for the long-term development of our country and we recognise that to achieve this goal too it is important to maintain and strengthen social harmony. It is vital for the existence of the state and society.”

“The president’s vision of creating a welfare society based on a strong state, economic growth and opportunities for universal employment by 2050 is quite attainable. In the Tatar and Bashkir communities, we are confident of it,” Karimov said. “We recognise and welcome the central role of national patriotism to maintain and defend our freedoms and security and guide our country into a better future.”