By Nadezhda Khamitova in International on 23 January 2013

ASTANA – On January 18, President Nursultan Nazarbayev held his annual meeting with the representatives of the foreign diplomatic missions and international organizations accredited to Kazakhstan in the Akorda Presidential Palace here.

President Nazarbayev (right) hands apples and other goodies to foreign ambassadors at a reception following his traditional meeting with the diplomatic corps, which now includes 65 heads of missions in Astana and one in Almaty.

In his welcoming speech, President Nazarbayev expressed his confidence that the coming year would be successful and productive for the development of bilateral relations with other nations and international organizations.

“Last year, I made nearly two dozen visits to foreign countries,” the president said. “Kazakhstan was visited by the heads of nearly a dozen countries and international organizations. Meetings and talks were held with the leaders of world and regional powers such as the United States, China, Russia, France, Britain, Germany, Turkey, Indonesia, Malaysia and the United Arab Emirates.”

“The Asian vector of Kazakhstan’s foreign policy has been strengthened,” the president said. “Kazakhstan’s first diplomatic mission in South America, its embassy in Brazil, was opened. The Fourth Congress of World and Traditional Religions was held in Astana with leaders on the highest level coming from around the world. I thank all the diplomats working in Astana for your contribution to the organization of all these fruitful meetings, visits and forums.”

President Nazarbayev summarized the results of the nation’s diplomacy over the past year. He said 2012 had been one of the most successful years in the foreign policy of the country. Kazakhstan significantly strengthened its position in the region and the world, and attracted 20 billion dollars in foreign direct investment.

At the 2012 Nuclear Security Summit in Seoul, South Korea, Kazakhstan was recognized as a de facto leader of the global non-proliferation movement. 2012 was also the year when The ATOM Project petition campaign was launched, a project aimed at changing the world for the better and making it a safer place for the living.

Also during 2012, Kazakhstan’s economic and regional initiatives as a founding partner in the Customs Union and the Common Economic Space were brought to full success.

The president also discussed the most significant points of his recently announced “Kazakhstan 2050” strategy.

“Now we have entered a new historical stage, opening fundamentally different possibilities and prospects,” he said. “In the annual address to the nation, which I announced on the 21st anniversary of independence, I listed the early achievement of most of the objectives stated in the nation’s development strategy up to 2030, which we have been implementing for the past 15 years. I have now approved and adopted a new strategy called ‘Kazakhstan 2050.’”

“This move was made because Kazakhstan has become a different country to what it was 15 years ago,” the president said. “We are in a completely different, more powerful international position. This applies to the global economy and to geopolitics as well. Therefore, the new “Strategy 2050” corresponds to the completely different nature of the challenges and threats today compared to those which we faced at the end of last century.”

“The strategy will build on innovative economic and social principles to develop the country and society. This is the main sense of Kazakhstan’s new policy until the middle of the twenty-first century. I have set the daunting task for Kazakhstan to become one of the 30 most developed countries of the world. This is the main objective of our strategy,” he said.

President Nazarbayev also outlined the strategic goals and objectives of the country’s foreign policy for the next decade. He announced the start of work on the formation of the Regional Centre for Multilateral Diplomacy in Almaty.

“There are 16 representatives of organizations, programmes, funds and specialized agencies including the United Nations with regional and sub-regional status,” Nazarbayev said. “Now we are working on the creation of the Agency for International Development Assistance (KAZAID). It will provide technical assistance to our neighbours and other states. In general, we will do everything required to keep the heart of Eurasia beating calmly and smoothly in unison to the benefit of stable regional and global development.”

President Nazarbayev said that as a dynamic state Kazakhstan formed its own vision of an effective world order in the new century. He said the G-GLOBAL online discussion forum represented the five principles of the world order in a multi-polar world. These included adopting the evolutionary approach to developing society and rejecting revolutionary changes in politics, and embracing the values of justice, equality, consensus, global tolerance and trust, global transparency and constructive multilateralism. The search for a possible solution for the majority of global problems was possible on this basis, the president said.

The president said these values have all become part of the global dialogue. They have been discussed in the United Nations and other international organizations within the framework of Kazakhstan’s multilateral and bilateral negotiations with other countries. Nobel laureates, political leaders and global policy experts have supported the G-GLOBAL initiative.

“I explained the initiative during the Astana Economic Forum and the Fourth Congress of Leaders of World and Traditional Religions in the summer of last year,” the president said. “G-GLOBAL is a new format for global dialogue, which we offer to the world. In addition to the G-8 and G-20 gatherings of global leaders, it offers a comprehensive format, which is the highest form of geopolitical mathematics for the 21st century.”

“A global community dialogue on all issues concerning issues of the world economy and politics is a necessity,” the president said. 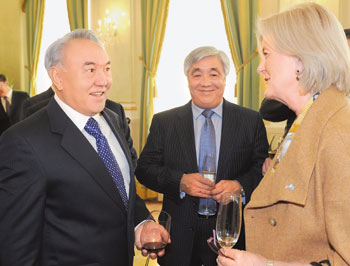 “I proposed to convene a world crisis management conference in Astana to work out a global anti-crisis plan for the United Nations,” the president said. “It was agreed that the ongoing crisis has a global nature. But no one has made any global conclusions for dealing with it. The measures that are being taken look more and more like the burning of hundred dollar bills in search of one cent lost in the darkness.”

“Finding a way out of the global crisis is not possible without the world taking steps towards creating an adequate and efficient financial architecture,” President Nazarbayev said. “This is what should be discussed, especially within the framework of the United Nations and the international financial organizations. Therefore, I invite our foreign partners to participate in the next Astana Economic Forum to be held in June this year,” he said.

During the discussion with the ambassadors, the president said Kazakhstan, Russia and Belarus “will continue to strive toward our common goal, and I want to stress once again that Eurasian integration, which is proceeding at my personal initiative, has never been, and never will be, a reincarnation of any political union, and particularly of the now-defunct Soviet Union.”

“Kazakhstan, Russia and Belarus remain independent states with their own national interests,” the president said adding that any suspicions about the aims of the Eurasian integration process were groundless.

The president also responded to questions about the reasons for the proposed switch of the Kazakh language from the Cyrillic to the Latin alphabet. Having recounted various reasons for the move of linguistic nature pertinent for the information age, President Nazarbayev also stressed that there were no geopolitical reasons for the change.

The president then asked the heads of all the diplomatic missions in the country to inform the leaders of their countries about his call for them all to make a concerted effort to create a just world order, free of war and mutual suspicion.

“In a short period of time, Astana has become one of the new centres of international diplomacy. It hosts summits and major events of a global scale,” President Nazarbayev said. “I remember that at the end of the last century, at such meetings I had to call your predecessors to boldly move to our new capital. Today, 65 out of the 66 diplomatic missions accredited in Kazakhstan work in Astana. We have created and keep on creating favourable conditions for work and for the lives of diplomats’ families.”

“Kazakhstan is always attentive to your requests and needs, since the development of bilateral relations between Kazakhstan and each of your countries depends on the quality of your work,” he added.

Russian Ambassador Mikhail Bocharnikov, the dean of the Diplomatic Corps, responded to the president’s speech on behalf of all the diplomatic missions.

“With hindsight, looking back at 2012 we should note the important stages in the life of this country and its achievements, which pleased all aspects of Kazakh society and strengthened the international prestige of the country,” Bocharnikov said. “A striking example of Kazakhstan’s success was its victory in winning the right to host the EXPO 2017 international exhibition in Astana.”

“For diplomats, it is clear that, despite the difficult financial and economic situation in the world, Kazakhstan’s continues to develop positively and dynamically. We all share your assessment that in global politics Kazakhstan is a responsible and reliable partner which enjoys an undisputed international reputation,” he said.

Ambassador Bocharnikov said diplomats were familiar with the new tasks set out in the president’s “Kazakhstan 2050” strategy. He said the deep and thorough analysis of the world situation and current global challenges made by Kazakhstan deserved the greatest respect.

“I am confident that all the heads of diplomatic missions will confirm that their work in Kazakhstan is very rich and interesting. In addition to bilateral negotiations, it includes participating in international and national events with leading personalities,” he said.

President Nazarbayev also noted the active role played by foreign embassies in developing relations between Kazakhstan and international organizations. Then Ambassador Bocharnikov expressed his appreciation for the careful attention paid by the president and the government of Kazakhstan to the diplomatic corps.

President Nazarbayev wished success to all the diplomats attending the event.

“Our ‘Strategy 2050’ opens new horizons for cooperation and partnership between Kazakhstan and all interested countries,” the president said. “Together with you we are concerned that our interaction should be filled with valuable content. The friendship and trust between our nations is contributing to the strengthening of peace and security in Europe and the world at large.”

“I ask you to convey my best wishes to your heads of states and governments, leaders of organizations that you represent. Once again, I want to thank everyone for their good feelings for our people, for your kind words and good wishes to us, and for your support for our country in those difficult moments that we experienced last year,” President Nazarbayev said.