By Galia Shimyrbaeva in Culture on 23 January 2013

ASTANA-PARIS – The CROUS gallery in Paris is hosting a personal exhibition of a young Kazakhstan artist Kamilla Gabdullina titled “Knots and hands”. 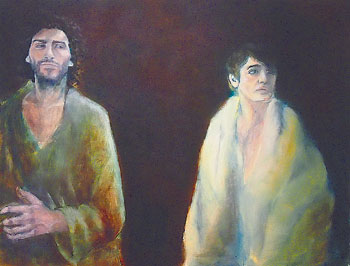 “I am interested in the phenomenon of mimetism (a kind of mimicry – auth.) in the crowd, that gets worked up easily,” the author said.

“The visitors of the exhibition gave a positive feedback. They say the exhibition of Kamilla’s paintings have a ‘breath’ of the present day and the feel of a life in eternity at the same time”, poet and director Erbol Zhumagulov said adding that this makes her art understandable to diverse audiences.

Unsurprisingly, the fate of the young artist is a reflection of her generation’s life, and her youth which easily fits into the world community.

Gabdullina is a graduate of the National Academy of Fine Arts in France, where, she, a girl from Almaty, went after high school to learn the language. Then, unexpectedly to all, especially to her parents, a childhood hobby came back to her, when she could sit for hours with pencil and paper, drawing the world around her.

She then decided to apply to the art academy. In 2006, she was admitted, after passing a tough competition (only 5% of applicants were admitted), and in 2011 became the first and so far the only Kazakh graduate of one of the most prestigious and oldest art schools in France. 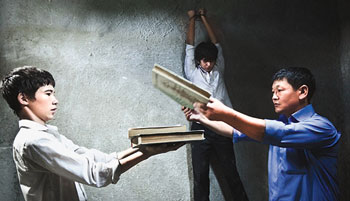 Her artistic credo is to penetrate the subconscious mind and to subjectively see and express the world. The topic of interest to her is the conflict between spiritual and material worlds. What follows from it and takes shape thanks to the artist’s brush has nothing to do with reality, but is trying to find its place in space.

Exhibition “Knots and Hands” was organized by the Regional Centre of young contemporary artists (CROUS), funded by the Ministry of National Education of France, and is aimed at promoting young talents.