By Yuri Lifintsev in Tourism on 23 January 2013

ALMATY, December 28 – A new ropeway opened at the Shymbulak Ski Resort near Almaty city in December. 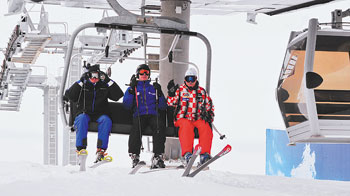 The new aerial ropeway is just one kilometer long, but it was a significant event in developing the infrastructure of this resort.

The slopes of the Left Talgar Mountains are being developed in the Shymbulak Resort area. The new ski routes that were opened are designed for beginning-level skiers and snowboarders.

Shymbulak traditionally attracts good skiers to its demanding slopes and trails and 80 percent of visitors who use them fit into this category. Shymbulak’s skiing trails are rated as among the 10 most difficult ski runs in the Commonwealth of Independent States.

However, the resort’s operators recognize they need to be able to attract the much larger potential market of entry level and casual tourist skiers and are making the most demanding slopes safer and less challenging. The new project to open trails in the Talgar Mountains is specially designed for this larger market. So far, one well-equipped, relatively flat run has been completed in the area and this may soon be increased to four.

After the opening of the new cable lift and an excursion round the new route, visiting journalists attended a press conference with the directors of the Shymbulak Resort and foreign skiing experts working in Kazakhstan or visiting the country.

The panelists said active outdoor recreation, mountain activities, snowboarding and other winter sports should be available not only to the residents of Almaty, but to the entire population. Viladomat, coming from the tiny European country of Andorra, shared his experience in developing the skiing tourist infrastructure of the Pyrenees and in teaching children to ski.