By Dannar Kalikhan in National Overview on 23 January 2013

ASTANA – The People’s Favorites-2012 has recognized Aruzhan Sain as a Tireless Social Activist. 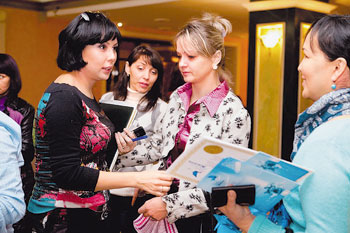 Aruzhan Sain (left) recognizes the work of activists and officials at a ceremony. Ms. Sain became a household name in many families which were impacted by her selfless work.

Sain is a director and co-founder of the charity fund of the Mercy Voluntary Society (www.detdom.kz). The society runs the Save Children’s Lives permanent charity campaign to raise funds to treat children suffering from incurable diseases and it provides assistance to orphanages and children’s homes.

The Mercy society was founded in April 2006. It helps children from all regions of the country and serves as a communication link between volunteers and those who need help. It has the goal of eventually organizing enough foster parents to make institutionalized orphanages unnecessary in Kazakhstan. Since the law on orphans was not yet finalized or comprehensive in 2006, the project was not developed immediately. However, by the end of 2011, amendments to the law allowed access to information about orphans that enabled the charity to function more effectively. The government is creating an online database of children waiting for adoption.

To promote the programme and to improve the process of adoption, the charity set up a new website www.usynovite.kz in 2012 working with the Committee on Child Protection of the Ministry of Education and Science. The charity hopes to finalize a new partnership with regional authorities that are responsible for orphaned children this year. They also plan to publicize their activities through social media.

The Mercy Society also helps severely ill children who cannot receive necessary treatment in the country. So far it has raised $2,568,842 to pay for medical treatment, including 436 surgeries to 374 children. This sum does not include donations made directly to parents’ bank accounts or payment for surgeries performed by foreign doctors working in Kazakhstan. 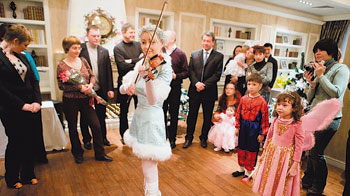 Events such as these concerts help Mercy attract more contributions for its work.

The Mercy Society is financed solely by donations from individuals and businesses. It works closely with the government in identifying social problems and individuals in need. The society held widely publicized events in Almaty and Astana, the country’s two largest cities, on April 22, 2012, to publicize its activities, raise funds and help indigent families with disabled children. Many gifts and necessary goods were collected and given to the Association of Parents of Disabled Children. As part of the effort, the Pony Express Courier Company collected gifts from boxes in stores and delivered them to disabled children.

In partnership with the Mary Kay Company, the society is also working on a programme to reduce the number of deaths from congenital heart disease. Kazkommertsbank offers account facilities for contributing to the “Give Kids Life” campaign.

Mercy Society executives say they operate under the guiding philosophy that charity is an act of gratitude and support to those who need help. They believe it is a noble quality in human nature that brings welfare to everyone in society. It enlarges human hearts and spreads the message of brotherhood and love.