By Maral Zhantaykyzy in Sports on 22 January 2013 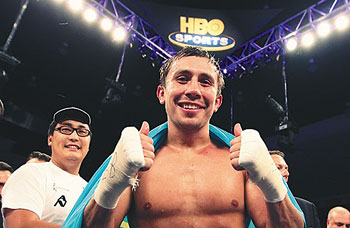 On his way to the titles, Gennady Golovkin has earned himself a reputation as tough fighter.

The 30-year-old Kazakhstani boxer took the ring against 26-year-old American Gabriel Rosado. The representative of Kazakhstan won in the seventh round with a technical knockout. This is Golovkin’s first win this year. The boxer says that this year he will participate in five fights.

Golovkin, born in Karaganda, was world champion in 2003 and a finalist in the 2004 Olympic Games. In 2006, he became a professional boxer. He has won all but one of his fights. The victory over Rosado was Golovkin’s 25th professional boxing win. The Kazakh boxer has won by knockout in 22 fights. Today, he is the sole holder of the WBA title.

Another citizen of Kazakhstan, Beibut Shumenov, owner of two light heavyweight belts from the WBA and IBA, defended his world championship titles in June 2012 for the fourth time. Shumenov wants to collect all the world’s light heavyweight titles and become the undisputed world light heavyweight champion. His next fight is against WBO Light Heavyweight Champion Nathan Cleverly.

In January, the Kazakhstan club The Astana Arlans (“Astana Alpha Wolves” in Kazakh) won in the sixth round of the World Series of Boxing (WSB) and they lead in Group B. This is the Astana Arlans’ sixth consecutive victory this season.

Boxing has become a national obsession in Kazakhstan. Even in Soviet times, Kazakhstani boxers shined in the ring. In 1981, Serik Konakbayev, two-time winner of the World Cup in 1979 and 1981 and two-time European champion, as well as silver medallist of the 1980 Moscow Olympics was officially recognized as the best amateur boxer in the world. In 1983, his success was repeated by Serik Nurkazov. In 1989, Igor Ruzhnikov of Temirtau reached the top step of the boxing podium.

With Kazakhstan’s independence, the successes of its boxers became even greater. In 1999, Bolat Zhumadilov won the country’s first gold medal in the United States city of Houston. Gennady Golovkin and Galib Jafarov in 2003 and Serik Sapiyev and Erdos Dzhanabergenov in 2005 took team gold medals at the World Championships. In total, Kazakhstan has taken six gold, six silver and 12 bronze medals in World Championships since its independence in 1991. Boxers from Kazakhstan have also won three prestigious Val Barker Cups, ahead of such recognized boxing powerhouses as Cuba and Russia. President of the International Boxing Association (AIBA) Dr. Ching-Kuo Wu noted: “In the world there are two countries where boxing is the number one sport. They are Cuba and Kazakhstan.”