By Marzhan Imanbayeva in Sports on 11 January 2013 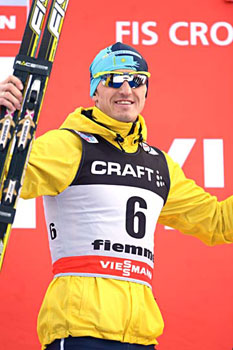 Poltoranin has been enjoying a successful season. He won several World Cup stages and won the gold medal in the Continental Cup.

The 25-year-old skier from Ridder in east Kazakhstan won the 15-kilometre World Cup classic style race in Davos, Switzerland in 2010. In 2011, he won four gold medals and one bronze at the Asian Games, more than any other competing athlete.

The Tour de Ski is the first multi-stage event in the history of skiing. It is held in late December and early January in the Czech Republic, Germany, Italy and Switzerland. Each Tour de Ski has consisted of six to nine stages, including pursuit skiing, sprint skiing and eventually long, mass-start races to complement the old time trial or individual start style of skiing. The last stage is traditionally held in the Italian Val di Fiemme as an uphill race.

Poltoranin now stands in sixth place in the World Cup rankings with 528 points behind Alexander Legkov of Russia with 799, Petter Northug of Norway with 759, Dario Cologna of Switzerland with751, Maxim Vylegzhanin of Russia with 691 and Marcus Hellner at 554.

The Cross-Country World Cup is an annual cross-country skiing competition organized by the International Ski Federation (FIS) and held from October to March. The results of individual races are recorded in points and the overall total determines the winners in different disciplines for men and women. Unofficially, the World Cup has been held since 1973. The tournament won official status in the 1981/1982 season. The World Cup consists of the Tour de Ski, WC Final and Nordic Opening tournaments. The result of the Tour de Ski stage held over the Christmas holidays determines the final standings.

The winner of the Tour de Ski men’s tournament was Alexander Legkov from Russia. The women’s title was won by Justyna Kowalczyk from Poland.