ASTANA, January 3 – On December 25, as part of the Industrialization Day a new wave of major investment projects around the nation were launched as President Nursultan Nazarbayev held a nationwide teleconference with senior officials and leading industrialists. 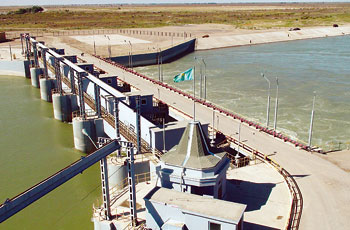 A dam on the Syr Dariya River helps regulate the water flows and subsequently improve the social and economic situation of the region.

The president inaugurated work on high-speed 4G LTE (fourth-generation long-term evolution) networks in Astana and Almaty, which will launch a new era of telecommunications in the country, and discussed the most recent results in implementing the 2010-2014 State Programme for Accelerated Industrial-Innovative Development (PAIID).

The event brought together leading businessmen, industrial executives, research scientists and technologists in the vanguard of economic diversification and innovative development.

The president announced the winners of the Altyn Sapa (High Quality), Paryz (Duty) and The Best Product of Kazakhstan contests.

The government is encouraging the rapid growth of small and medium-sized enterprises (SMEs) in the private sector to take advantage of the opportunities offered by Kazakhstan’s entry into the Customs Union with Russia and Belarus and its upcoming accession to the World Trade Organization, Altai Abibullayev, official spokesman of the Central Communications Service (CCS), told a weekly briefing in late December 2012.

“In this regard, the annual Altyn Sapa, Paryz and Best Product of Kazakhstan competitions are an important tool of national policy to support and stimulate domestic producers, businessmen and national exporters,” he said.

Kazakhstan State Railways (Kazakhstan Temir Zholy) won the 2012 Industrial Breakthrough award. It completed and opened five new factories and started work on building four more during the year. The Kazatomprom National Atomic Company, one of the leading uranium mining companies in the world, won the Innovation award, including for its launch of the solar panel plant near Astana.

The Eurasian Energy Corporation, a subsidiary of the Eurasian Natural Resources Corporation (ENRC), won the Best Social Project of the Year award for financing the construction of the Imanzhusup Kutpanuly Sports Palace in Aksu city in the Pavlodar region, costing more than one billion tenge.

During the national teleconference, President Nazarbayev also inaugurated work on three chemical industrial plants and a new metallurgical complex, including the KazAzot Company’s programme to expand production of ammonia, nitric acid and ammonium nitrate in the Mangistau region. The new plant will cost 5.61 billion tenge and will boost national ammonia and ammonium nitrate production by 50 percent. It is expected to improve labour productivity by 150 percent and to provide the domestic market with its full demand for nitrate fertilizers while producing more for export.

ArcelorMittal Temirtau in the Karaganda region has built a new factory complex to make industrial gases financed by the Linda Group in Germany. It will increase the production of oxygen, nitrogen and argon in Kazakhstan and end the need to use older types of industrial gases in the country.

The Sareco Company in the Akmola region is building a new 4.43 billion tenge factory to make high-tech products from rare-earth metals. It will be designed to the highest environmental safety standards and have an annual production capacity of 1,540 tons.

As part of the Industrialization Map, 162 new industrial factories were commissioned in 2012.

On Dec. 26, 2012 the Bekarys Company opened a plant to produce artificial quartz stone in Aktobe with a production capacity of 84,000 square meters per year. The factory cost is 247 million tenge and created 22 jobs. It is based on Italian technology designed by the Bretonstone company with equipment provided by Ruston, a leading Chinese company. The factory is the first of its kind in Kazakhstan and its finished products will be delivered to customers in the Atyrau, Mangistau and West Kazakhstan regions.

In his state of the nation address on December 14, President Nazarbayev stressed the need to expand and develop the PAIID programme through the new Strategy-2050 plan, which will create a powerful national industrial sector that does not depend on oil and gas resources to generate jobs and wealth.

To fulfill the national plan, new factories and industrial complexes are being systematically built in different regions.

Ardager Akzhigitov, chief of regional business and industry management, said more than 20 Industrialization Map projects were opened in the Kyzylorda region in 2011-2012.

The Munaimash company is building a new factory making machinery for use in the oil industry in Petropavlovsk. “We have implemented a unique and innovative project in our enterprise, which has no parallels in the Commonwealth of Independent States,” Munaimash Chairman Sergey Grigorenko told the teleconference. “Twelve units of new machine equipment manufactured in Japan, Brazil and the United States have been purchased for the plant, which will increase the proportion of the equipment manufactured in Kazakhstan to 70 percent.”

“The new factory will improve its product quality to international standards, expand the range of products for exports, reduce production costs by 20 percent and also cut energy costs,” he said.

A new milk processing plant has opened in the Almaty region.

“The plant is equipped with modern Italian equipment meeting international standards for the production of dairy products of more than 50 items – milk, cream, butter, cheese and other,” said Serik Bekeshev, deputy head of the Almaty Regional Business and Industry Department (ARBID). The ARBID said 43 factories costing 319.4 billion tenge are being built in the region. In 2010-2011, 22 factories worth 216.2 billion tenge were opened and 3,635 new jobs were created. In 2012, 14 projects worth $19.5 billion were opened.

Halillula Gran Aka, director of Kaztorgtrans, said a major flour production factory making 39,000 tons of flour per year has opened in the Kostanay region.

“The total cost of the project is over 450 million tenge. We plan to export flour to the Central Asian countries, including Afghanistan,” he said.

The Kostanay mayor’s office said nine new factories opened in the area in 2012 and more than 1,000 new jobs were created. He said another 14 new projects costing 8 billion tenge were opened in agriculture in 2012, creating 329 new jobs.

Amantai Zhussupov, director of the Investor Services Centre, told the teleconference that a new oil refinery will be built in the north.

“An alliance of investors from China, Kazakhstan and Slovenia was formed. The plant will be constructed in Bulaevo in the North Kazakhstan region, where the Russian oil pipeline and railway line are located,” he said. “Investors are currently choosing the plot of land for the plant and concluding their feasibility studies, which will be ready in January 2013.”

“The new plant has no parallels in Kazakhstan because it will have the most modern equipment. The project will cost $2.4 billion and it will process five million tons of oil per year. The foundation stone for the new plant will be laid by the end of 2012,” Zhussupov said.

The KazMunayGas (KMG) Corporation announced at the teleconference that it had received government approval for its feasibility study on constructing a new gas-processing plant in the West Kazakhstan region in partnership with the Italian oil major Eni. The two companies signed a cooperation agreement for the project on Nov. 5, 2009. Design work and budgetary planning for the project will be carried out in 2013-2014. Kazakh companies will participate in the design work.

“The enterprise will be of great importance in developing the region and all the oil and gas networks of Kazakhstan. At the construction stage, about 3,500 people are slated to be involved, which will become an essential contribution to the employment of the population of the region. At an operational phase, the number of the personnel will be about 700 people,” Nurlan Balgimbayev, director general of KMG Construction Enterprises, told the teleconference.

The conference was told that another 33 major projects worth 7.5 trillion tenge are being built under PAIID. They include an integrated chemical complex, the modernization of the Atyrau oil refinery, the Western Europe-Western China motorway, the Zhezkazgan-Beineu railway to provide direct cargo access from central Kazakhstan to the west of the country and to Europe, and the Arkalyk-Shubarkol railway, which will reduce the travel distance between the north and centre of the country to 700 km (420 miles) and optimize traffic flows.