During my first visit to Kazakhstan in 1991, I met a group of ethnic Germans who had lived in Kazakhstan for many years. These people told me that even if they had to move back to Germany, they would always consider Kazakhstan as their second homeland. 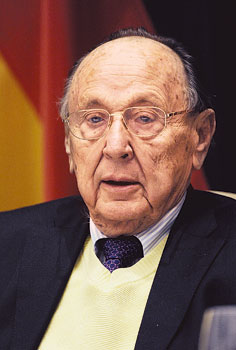 In those hard times in the 1940s, over 500,000 people of German nationality, having endured strokes of bad luck and far-fetched charges of treachery, by the order of Stalin were moved to Kazakhstan. The local people welcomed them with special kindness, despite their own troubles.

Having arrived for a visit to a new, independent Kazakhstan, I met with vigorous first President of the country, Nursultan Nazarbayev. He told me about the problems of the country and shared his plans on its further development. And in this private conversation it became clear how difficult this way would be.

But now, two decades later, we see the results. With great pleasure, we can state: Kazakhstan more than coped with the objectives set by President Nazarbayev. This refers to the internal development of Kazakhstan. This also applies to the foreign policy of this important country. In a remarkably short historical period of time, Kazakhstan has managed to gain trust in the region and in the international arena. Kazakhstan today is a player which has deserved the recognition of the whole world. In favor of Kazakhstan’s internationally-recognized authority is its successful chairmanship of the Organization for Security and Cooperation in Europe (OSCE) in 2010: the first state from the former Soviet Union ever to lead the 56-nation body.

During its OSCE chairmanship Kazakhstan worked not only on improving the internal development of the organization, but it also took steps to resolve many foreign policy issues. This was possible due to the authority of Kazakhstan and its leaders. Summarizing results, we can confidently say that Kazakhstan’s chairmanship has given a new impetus to the organization. The preparation and holding of the OSCE Summit in Astana in December 2010 held historic significance. Many asked for what purposes Kazakhstan carried out this summit? I believe that the Kazakh leaders understood all the responsibility they had for the obligations laid towards the international community.

Angela Merkel, the federal Chancellor of Germany, visited Kazakhstan twice during the period of Kazakhstan’s OSCE chairmanship. This underlines the importance of Kazakhstan as an important partner of Germany not only in matters of raw materials, bilateral trade, but also in the political sphere.

It is very pleasant for me to congratulate the readers of your newspaper on the occasion of the 21st anniversary of the Independence of Kazakhstan, especially in this anniversary year of Kazakhstan-German relations which have traditionally being characterized by strong friendship, trust and mutual understanding.

First of all, it was important to provide people with the most basic economic essentials of life since everyone wants to eat, to drink, to have shelter and to learn. Only after this was achieved could the turn of politics come. This strategy had crucial importance for the development and well being of Kazakhstan.

In the beginning of independence, Kazakhstan had to decide as one of the major questions facing it, what to do with the fourth largest nuclear arsenal in the world that it had inherited from the former Soviet Union. Forty years of nuclear tests had pernicious consequences for the nature and the population of Kazakhstan, over one million Kazakhs received dangerous doses of radiation; the zone of ecological damage contaminated a territory equal to the combined areas of Germany and Italy. In these conditions the President of Kazakhstan in 1991 made the wise and far-sighted decision to close the former Soviet nuclear test site, and nine months later Kazakhstan declared its renunciation of nuclear weapons.

Kazakhstan is not only an active participant in the OSCE and the Shanghai Cooperation Organization (SCO). It sets an active example of peaceful cooperation for the whole world.

At the 2010 OSCE Summit in Astana, Kazakhstan suggested that cooperation within the organization should cover both Europe and Asia. The constructive leadership that Kazakhstan displayed in its 2011-12 chairmanship of the 57-nation Organization for Islamic Cooperation (OIC) showed that these words were followed by action. Kazakhstan used its influence as the chairman of this organization to try and prevent and end confrontations of forces and to advance the idea of coexistence.

Kazakhstan presents a great example in terms of ethnic and religious tolerance and cooperation. This country with a Muslim majority population continues to demonstrate its aspiration towards promoting tolerance in interethnic relations and in the democratization of society.

In this regard, the President of Kazakhstan deserves recognition for his initiative to hold the Congress of Leaders of World and Traditional Religions. This congress is a significant contribution in establishing a global dialogue between religions and cultures.

The confrontation of cultures which many predicted is not inevitable. The challenge is for us to work to jointly create a peaceful and fair world order in which the coexistence of cultures and religions will be perceived not as a threat but as mutual enrichment. This new world order will be accompanied by a spirit of equality and justice and should be defined by the moral values fostered in each individual person. These include human dignity and a tolerant cultural identity which is expressed in respect towards other cultures.

This policy has no boundaries, whether they be religious or cultural. However it needs bridges. Kazakhstan is such a bridge. Thanks to the wise policy of President Nazarbayev, in a short period of independence the country also achieved internal and international harmony. Impressive successes have been achieved in the field of economic development, and a balanced and responsible foreign policy is being implemented.

At our meeting in February 2012 in Berlin, President Nazarbayev surprised me once again. He was still full of ideas, power and energy. He is still making new plans for the development of the country. I am sure he will successfully implement this new phase of Kazakhstan’s national policy.

The author is Germany’s former Federal Minister of Foreign Affairs.