ASTANA – On December 20, 2012, the Senate room of the Nazarbayev University was filled with buzz and excitement as young activists gathered for the opening of the local hub of the Global Shapers Community, an informal network of young people and groups which has now spread to more than 200 cities across the world. 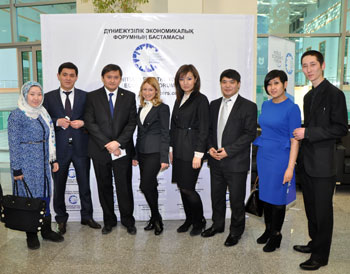 The brainchild of Professor Klaus Schwab, World Economic Forum Founder and Executive Chairman, the Global Shapers Community project has gained momentum since its inception in early 2011 and has now reached the depths of Central Asia, into Kazakhstan’s capital.

The project’s headquarters in Geneva takes care to visit each individual hub, and the selection of founding curators is a matter of thoughtful deliberation. Anastasia Kalinina has travelled to meet with the local hub curator, Sayasat Nurbek, and to present to the guests the concept and first shapers of the city. Nurbek serves as president of the Education and Science Ministry’s Center for International Programmes which manages the presidential Bolashak scholarship programme.

The Global Shapers Community is an interesting product of its time. Fifty percent of the world’s population is under the age of 27, the majority of whom live in urban areas. It is this generation that, through their passion, dynamism and entrepreneurial spirit, is expected to shape the future. And, in Kazakhstan, it is also this generation about which President Nursultan Nazarbayev spoke in his most recent address to the nation in mid-December 2012 “Strategy 2050” as the people who are peers of this country’s independence and who will be fully mature citizens of Kazakhstan by 2050.

“We are becoming increasingly aware that solutions to our global challenges must purposefully engage youth, at all levels – locally, regionally, nationally and globally,” Professor Klaus Schwab says on the Global Shapers website. He developed a certain “stakeholder theory”, the underlying principle behind all his work at the World Economic Forum. The principle that Klaus Schwab outlined is that companies serve not only shareholders but all the stakeholders of their organization. This includes all the social groups which are connected directly or indirectly to the enterprise and which are dependent on its success and prosperity, including not just shareholders and creditors but also employees, customers, suppliers, the state and the society in which the enterprise is active.

Currently, the projects of the Astana hub are still in their development stages, but young activists will be aiming to contribute to resolving concrete problems and challenges of the city. Energy saving and preparation for ASTANA EXPO 2017 will undoubtedly be among top priorities of the hub, while socially relevant projects such as rural migrant integration and youth employment will also be on the agenda. The hub is planning to host business entrepreneurship seminars and make a real difference in the community.

The shapers selected so far have been recommended by the headquarters of the community but the applications are welcome from all highly motivated individuals who have a great potential for future leadership roles in society. They are selected on the basis of their achievements, leadership potential, and commitment to make a difference. Through the Global Shapers Community, the so called Shapers are provided with opportunities to connect with the worldwide network of other Shapers globally, to network with other World Economic Forum communities, and to represent the voice of youth at World Economic Forum events. Shapers are united by a common desire to channel the members’ energy and enthusiasm into building a more peaceful and inclusive world.

Other guests at the presentation in Astana included Baurzhan Baibek, deputy chief of staff to the President of Kazakhstan. He said: “The address of the President, focused on 2050, is aimed at young people. And all that we have gained, our experience and knowledge, we must pass on to future generations. This programme is aimed at the implementation of this sole and high purpose. Global Shapers have chosen Astana as a hub because it is the pride of the region, and this is an achievement for us.”