ASTANA, Dec. 25 – In the years of national independence, Kazakhstan has made significant economic and social progress and has positioned itself as a leading state in addressing national, regional and global environmental problems. The initiatives of on closing the Semipalatinsk nuclear test site, establishing a national policy of nuclear non-proliferation, destroying the country’s nuclear weapons and efforts to save the Aral Sea have proved of great importance for sustainable development and global security. 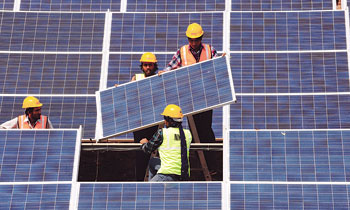 Workers install solar panels. Kazakhstan has launched the production of solar panels near Astana as part of its industrialization drive.

At the Rio Plus 20 World Summit on Sustainable Development, Kazakhstan launched the Green Bridge Interregional Partnership Programme (GBIPP) and the Global Energy Strategy (GES). These programmes seek to close the technological gap between countries through technology transfer. They are also creating a practical mechanism for greening the economy through the development of new ecologically friendly industries and businesses. The GBIPP and the GES share the goal of meeting the needs of all nations in energy and other natural resources by the middle of the 21st century, including the active use of renewable energy sources.

In his annual state-of-the-nation address, President Nazarbayev said all nations needed to develop new technologies to improve energy efficiency and conservation. An international conference including leaders from Europe, Asia and the Pacific region will be held in the first half of 2013 to review draft documents on establishing a new international organization to implement the GBIPP.

Kazakhstan has unique opportunities to make the change to a green economy thanks to its favourable geopolitical position, sustainable technological development, potential to develop renewable energy resources and its financial reserves.

There are huge opportunities for green businesses in the energy sector of Kazakhstan. Renewable energy development is one of the priorities in the State Programme for Accelerated Industrial-Innovative Development (PAIID) for 2010-2014.

Experts believe Kazakhstan may produce 20 percent of its electricity from natural gas by 2030 and 40 percent by 2050. The country has 3.5 trillion cubic metres of proven gas reserves, among the 10 largest reserves in the world.

The country also has the potential to produce 1 trillion kilowatts of electrical power per year from wind energy, or 25 times the amount of oil and natural gas used per year.

There is also great potential for solar energy development, which could also produce 1 trillion kilowatts of electrical power per year if effectively utilized. Kazakhstan has 200-250 sunny days every year, and as many as 300 sunny days per year in its southeastern regions. The solar radiation energy reaching the country is estimated at 1,300 – 1,800 kilowatts per square metre every year. The most favourable locations for solar electric installations are the Aral Sea and the southern regions, which currently suffer from a lack of electricity.

President Nazarbayev has set the task of creating innovative and advanced industries and solar energy may be one of them thanks to its geographical location in the global “sun belt.”

Solar water heating systems are an innovation in Kazakhstan. So it is practical and profitable to open new businesses in solar energy. Solar collectors are easy to install individually and as systems.. Winter systems to collect solar power are also practical. They require circulation pumps, controllers and a specially equipped storage tank, and use antifreeze as a coolant.

The Joint Kazakh-German Solar Roof project was launched in Astana in September 2012 when 42 solar panels were installed on the roof of Gumilyov Eurasian National University. They already provide part of the university with electric power.

Kazakhstan’s first solar power station capable of generating 52 kilowatts was launched in June 2012 in the village of Sarybulak in the Almaty region. It provides lighting in homes and drinking water supplies using only renewable energy sources. The project was directed by the Ministry of Industry and New Technologies and aid from South Korea with the support of the UN Development Programme in the framework of the Green Village project.

The Samruk-Energo Company has started building a solar power station in Kapchagai 75 kilometers (45 miles) north of Almaty with a capacity of 2 megawatts. It will be the first commercial-scale project in Kazakhstan in solar energy and is scheduled to start operating in 2013.

Oral Karpishev, head of the Samruk-Energo press-service, said the Kapchagai project will be the first large solar power station in Kazakhstan. It will use photovoltaic panels of single-crystal silicon, which convert solar energy into electrical energy with minimal loss.

Solar energy is recognized as one of the most promising types of alternative energy and is being widely developed in the United States, China, Japan, Germany and Israel.

The production of photovoltaic wafers in Kazakhstan will be able to fully provide electricity throughout the country, including its most remote regions. Kazakhstan is self-sufficient in raw quartz required for this. The country’s reserves are estimated at 267 million tons.

Kazakhstan is also rich in rare earth elements necessary to make solar cells including gallium, arsenic, germanium and cadmium. Kazatomprom and Japan’s Sumitomo Corporation launched the Summit Atom Rare Earth Company (SARECO) to mine and process these elements in November 2012.

So far, 300 research projects have been started to make semiconductors, batteries and solar cells and develop the desalination of salt water and build new solar plants. Solar cells produced in Kazakhstan are expected to be environmentally friendly and much cheaper than their foreign equivalents.

The transition to a “green” economy using renewable energy sources is expected to maintain long-term economic growth and make Kazakhstan an industrial leader in Central Asia and Eurasia.

Such a transition also falls perfectly in line with the country’s preparations for EXPO 2017 in Astana under the theme of “Future Energy.” Astana won the right to host an expo on this theme after a vote by the Bureau International des Expositions (BIE) in Paris in November 2012.