The Eurasian Economic Commission (EAEC) in its new form has been working for only nine months, but it has already achieved good results. 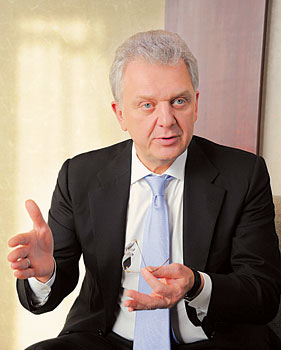 Increased integration between EAEC member nations is a key element to resisting future global economic crises. It is also a key element of development. We need to achieve four freedoms: those of movement of goods, services, capital and labour.

First, the commission has proved itself as an executive body. The EAEC is unprecedented in its status. As a supranational body it executes a wide range of functions, including all customs, technical regulations, foreign trade, protective and other measures. It has staff of more than 650 from its three member states Russia, Kazakhstan and Belarus.

Russia has become a member of the World Trade Organization (WTO) and many things have changed during the 18 years of its negotiation process. Most of the decisions and agreements reached by Russia on its road to join the WTO are already being implemented by the commission to be applied throughout the Common Economic Space with regard to the WTO rules.

In September, a new Common Customs Tariff adopted by the commission came into effect. It applied to more than 11,000 commodity items in the three countries. WTO rules extend to all members of the Customs Union. Therefore, they now apply to Kazakhstan and Belarus, as well as Russia.

More changes will soon follow. The three CU/CES member states will become more economically integrated and as they do, they will more fully comply with the standards of the global market.

The CU/CES is already bringing rapid progress to its member states. All three of them are showing steady GDP growth of more than 4 percent a year. The annual rate of investment growth has soared to 8.3 percent.

The three countries’ trade volume is also growing. In the first nine months of 2012, it rose by 9.9 percent. The growth of trade between CU member states is double the growth of their foreign trade.

This is a positive trend and the pattern of trade between CU member states is balanced and sustainable. Oil and hydrocarbons exports are the leading commodity in CU foreign trade, metal exports come second. The export of machinery and equipment remains minimal. Mineral exports and trade between CU member states comes to 40 percent of their total trade and machinery and equipment make up 20 percent. This is a very healthy pattern.

The CU has also proven beneficial in encouraging the creation of new businesses. There is obvious competition between the three CU member states to attract new companies by offering a more favourable legal environment in terms of profitability, taxes and less bureaucratic restrictions. Currently, the number of companies registered in Kazakhstan is much higher than in Russia.

Labour mobility is growing between the three CU member states, especially in the flow of migrant workers from Kazakhstan and Belarus into Russia. No special permission or employment quotas are required. There is now only passport control on the borders. We are looking forward for this last remaining barrier between the three countries to be eliminated.

Negotiations between the CU and Vietnam on a free trade agreement have reached an advanced stage. Prospects for trade agreements also look hopeful with the European Free Trade Association of Switzerland, Norway, Iceland and Liechtenstein. The CU is also seeking to increase its trade with the European Union. And the growing market of the Asia-Pacific Region (APR) is becoming more attractive. It now accounts for 40 percent of imports to Customs Union countries. Some 20 percent of CU exports go to the APR making Asia a significant trade partner.

The Customs Union and the Common Economic Space are also preparing to expand and welcome new member states. The Kyrgyz Republic has formally applied to join and a CU special working group has been set up to deal with it. The process is difficult as the consequences for existing CU states of new members coming in have to be evaluated first.

Tajikistan, as a full member of the Eurasian Economic Community (EurAsEC) is also considering the possibility of joining the Customs Union.

Officially, the CU has not received any more formal applications to join it. However, the possibility is being considered in Moldova. Public opinion and some political leaders in Ukraine and Armenia reportedly would also welcome joining the CU. CU leaders welcome dialogue with these countries and exploring appropriate forms of cooperation with them.

The global economy over the past half century has demonstrated the remarkable benefits of an open market. However, the global financial crisis of 2008-9 revealed the significant risks that can also flow from globalization. Those events made countries around the world seek increased protection from such global risks. It led many governments to ask: what unions should they form and how can they better protect their national and regional interests in cooperation with their neighbours?

In December, the Supreme Eurasian Economic Council will hold a presidents’ summit where the leaders of the three nations will receive a progress report on CU integration in 2012. They will also consider a number of important questions, including plans for a free trade regime between Commonwealth of Independent States (CIS) and budgetary plans for 2013. [The summit did take place on Dec. 19.] In the 18 months of 2013 and the first half of 2014, CU member states must also finalize their agreement on the Eurasian Economic Union. This task was set by the presidents.

The support of the three CU heads of state is essential for the EEC to succeed. The presidents in this project play the role of the main legislators, since the international agreements signed by the presidents and ratified by the national parliaments become basic regulatory structures for the integration associations.

The author is Chairman of the Board of the Eurasian Economic Commission.

The Russian-language version of this article was first published in Kazakhstanskaya Pravda newspaper as an exclusive interview on December 5, 2012.