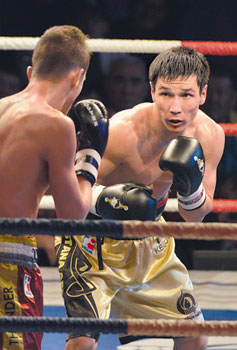 Astana Arlans continues its winning streak with six victories under their belts this season.

Arlans Head Coach Sergey Korchinskiy chose almost the same team of boxers against the German Eagles as was on the team that defeated the Italia Thunder in the last contest of 2012.

Bagdad Alimbekov, Eric Donovan and Sergey Derevyanchenko all returned to the ring with Hrvoje Sep and Filip Hrgovic from Croatia replacing Ramzhon Akhmedov and Mihai Nistor. Ireland’s Eric Donovan on the Arlans team battled his fellow Irishman David Joyce with the German Eagles.

Kazakhstan’s Bagdad Alimbekov in the 54-kg (118.8 lb) weight division fought Romanian Nicolae Andreian in the first bout. Alimbekov was confident from the opening bell and knocked down Andreian. Then the referee stopped the fight and gave Alimbekov the victory.

Donovan had a long, tough struggle with Joyce in the 61-kg (112.2 lb) division and was eventually defeated.

Ukraine’s Sergey Derevyanchenko in the 73-kg (160.6 lb) division won an early victory for the Kazakhstan team against the Eagles’ Ikhek Pascali. Derevyanchenko was the highest ranking 2012 WSB boxer when he fought in 15 contests and won all of them.

In the 85-kg (187 lb) division, boxers Hrvoje for the Arlans defeated Serge Michel representing the Eagles.

In the last bout, the Arlans’ Hrgovic in the heavyweight, or 91 kg (200.2 lb) division, defeated Eric Brechlin for the Eagles

Thanks to its victory over the Eagles, the Arlans scored 15 points and remained the leader of Group B.

In their next fight, against Ukraine Otamans in Almaty on January 18, Astana Arlans fighters scored another major victory, of 4:1.

Arlans’ fighters Miras Zhakupov (under 54 kg), Samat Bashenov (under 61 kg), Iranian legioner Ehsan Ruzbahani (under 85 kg) and Ruslan Myrsatayev (over 91 kg) brought this victory to the team that continues to dominate Group B of the three year old World Series of Boxing.