ASTANA – Kazakhstan places great importance on the development of youth policy with a number of state programmes launched in order to support the young over the past few years. These programmes include “With the Diploma to The Village”, “Youth Practice” and “Zhasyl El” (Kazakh for “green country”). 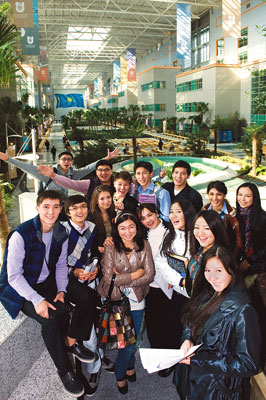 Creating conditions and possibilities to enable youth to increase their potential should become a major part of youth policy, experts believe.

Today, in the Karaganda region in the center of the country alone there are 59 registered public youth associations. The development of various forms of self-government, including youth parliaments and other elected bodies, is encouraged.

The country is currently grappling with many challenges in various areas of socio-economic development. Preparing younger generations to meeting these challenges is the main goal of today’s youth policy.

At a recent forum in Astana experts agreed that educated, healthy, enterprising young Kazakhs should take responsibility for the state’s investment in them, realize the importance of development in Kazakhstan and understand the potential they have in this period of development.

“In his address on socio-economic modernization, the main vector of development of Kazakhstan, President Nursultan Nazarbayev noted that young people should not only obtain knowledge, but also the ability to use it in the process of social adjustment. Consequently, the Youth Research Center, created by the Eurasian National University to conduct deep research among young people, will focus on the search for adequate answers to current challenges and risks of youth development, youth policy and the youth movement,” Yerlan Sydykov, the rector of the Lev Gumilyov Eurasian National University said at the international forum, “New Kazakhstan in a New World”, at the Nazarbayev University here on November 29.

Sydykov was speaking at a separate panel of the forum devoted to youth problems and youth policies.

“In the period from 1994 to 2012, the Bolashak Programme awarded more than 8,500 scholarships. The Bolashak scholarship has become a way of guaranteeing a successful career and professional fulfillment for its graduates. Many graduates of the programme hold responsible posts in state institutions, in state and international organizations, in joint-stock companies and work on different state and international projects, thereby contributing to the further development of the state,” Sayasat Nurbek, president of JSC Center of International Programmes which manages the Bolashak scholarship, said.

The list of the higher education institutions recommended by the Bolashak programme includes more than 100 universities from 33 countries. Over the past three years, Bolashak scholarships have been awarded to 3,194 students.

In 2011, by the decision of the National Commission for Training Abroad under the chairmanship of the then Secretary of State of Kazakhstan Kanat Saudabayev, the Plan for the Bolashak Scholarship for 2011-2015 was adopted. According to the new format, priority directions for Bolashak scholarship winners are training programmes in foreign scientific and pedagogical, technical and medical organizations.

Elsewhere, in 2005, the Zhasyl El programme was launched. The programme is based on the idea of engaging young generations in creative work for the benefit of the nation. They also employ youth to give students a chance to work on subsidiary projects, and also to plant trees and shrubs during summer vacations.

“As soon as the national staff for the youth working groups was set up, Zhasyl El activities were organized in all regional centers, and in Almaty and Astana. In 2009, the number of the settlements with active youth working groups was 75 to 86 cities and settlements. By 2011 this figure had grown significantly and included 138 geographical projects across Kazakhstan. Wide territorial coverage provides opportunities not only to city youth, but also to rural youth of Kazakhstan,” Talan Gizzatov, deputy chairman of the Zhasyl El national headquarters, told participants at the forum.

“President Nazarbayev’s statements about the crucial role of youth in the modernization of the economy and the professional management of the state are extremely important. Young professionals should find their place in the processes occurring in the country in order to take an active part in the construction of the future.’ This phrase from the address best illustrates the importance of young people and encourages young men and women toward excellence in their studies and work,” Representative of the Alliance of Kazakhstan Students Chinghis Beksempirov said in his remarks at the forum.

Experts agreed that creating conditions and possibilities to enable youth to increase their potential in economic, social and innovative spheres, as well as focusing on implementing breakthrough development projects in Kazakhstan should become a major part of this stage of youth policy. Young people in turn, using opportunities provided by the state, should direct their potential toward the sustainable development of Kazakhstan.