By Maral Imanbayeva in Tourism on 10 December 2012

ASTANA – Altai is called the golden cradle of the Turkic World. Recent research in the excavation mounds at Berel has revealed some of the most ancient settlements of human civilization. 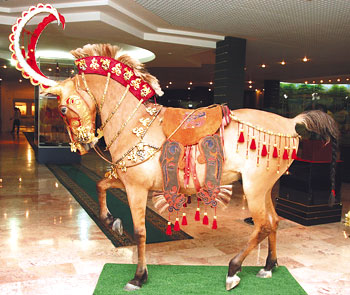 The buried horses were saddled and bridled; the heads of some of them were dressed in masks, and given wooden horns in the style of mountain goats.

Peoples from East Asia and the Far North, including the Finno-Ugric people originally came from the Altai region. Today, experts confirmed that the Berel area contains outstanding monuments of the ancient nomads of the Altai Mountains. These burial mounds composing an ancient cemetery are located in the valley of thethemhtarma River in the Katon Karagai district of the East Kazakhstan region. The valley is surrounded on all sides by natural barriers including rivers, mountains and forests making it the most suitable location for the sacred site.

The Berel burial ground is formed by several parallel chains of mounds that extend on a south-east – north-west axis. It also includes a group of individual funeral-memorial structures. Each chain of collective graves or mounds marks the dynastic affiliation of people buried from different tribal entities who inhabited the Altai sub-region in the second half of the 1st century BC.

Large mounds were discovered to be the resting place of the nomadic elite: Medium and small mounds provided evidence of profound social stratification and differentiation among the different classes of the ancient nomads. The earliest burial mounds were built in the fourth to third centuries BC, or 2,400 to 2,300 years ago. The latest ones were dated to the Old Turkic period, the sixth and seventh centuries AD, or 1200-1300 years ago.

The first archaeological excavations in the area were carried out in 1865 by the Turkologist, scientist and archaeologist Vasiliy Radlov. However, the Berel cemetery only became known to the wider public in 1998 when an international expedition of Kazakh, French and Italian archeologists conducted excavations under the guidance of Kazakh archeologist Zeinolla Samashev. This expedition excavated burial mound No. 11 of a Saka Prince dating to the fourth century BC.

At Berel, scientists discovered the phenomenon of frozen tombs or ice lenses composed of artificial permafrost: They contain a stone mound and fine gravel without filler that acts as a natural cold preservative. Because human remains were preserved in this way through the millennia they still contain invaluable information that is enabling archaeologists, historians and scientists today to rediscover the culture, crafts and history of the nomads.

The genetic analysis of human tissues is restoring the images and health secrets of the people and animals who lived in that distant era.

In the first century BC, the vast expanse of Eurasia from Ordos in China to the Danube was occupied by peoples who were mentioned in the ancient Eastern records as the legendary Scythians, Saka and Sarmatians. The Greek poet Homer called them Arimaspians or “the gryphons, guarding gold,” the Chinese called them yuezhi. References to this people are also found in the works of Aeschylus and Herodotus.

“When you have crossed the stream that bounds the two continents, toward the flaming east, where the sun walks… beware of the sharp-beaked hounds of Zeus that do not bark, the gryphons, and the one-eyed Arimaspian folk, mounted on horses, who dwell about the flood of Pluto’s stream that flows with gold. Do not approach them…,” Aeschylus wrote in his Prometheus Bound.

The Arimaspians mined gold in the Altai Mountains from which they produced magnificent jewels in the Scythian animal style. At Berel, the archaeologists found tiaras, pectoral jewelry, ritual objects, knives, swords, other jewelry, and a three-dimensional image of an elk’s head in its beak a griffin.

The pieces were made from wood, leather and felt and then covered with gold foil, tin and red ocher. The skilled craftsmen created numerous realistic and fantastic images of animals including cats, deer, horses, eagles, fish, wolves, camels, wild boars, mountain goats, sheep and rabbits. These ancient artists used their images of animals and birds to convey their properties: the rapacity of a panther, the vigilance and tenacity of an eagle and the gracefulness of a deer.

The archaeological record confirms the ancient historians who wrote that the ancient Arimaspians were great metallurgists, builders, potters, jewelers, woodcarvers and painters. The excavations have confirmed that they had mastered a diversified manufacturing technology. They cast metals, carved bones, in the form of flat bas-reliefs that were often inlaid and riveted.

Indeed, the technological masters of the Saka period produced gold jewelry through a sophisticated manufacturing technology that was lost through the millennia until it was rediscovered now. They could produce a white gold when gold falls on a silver base. Today, we do this through the advanced technology of electrolysis. 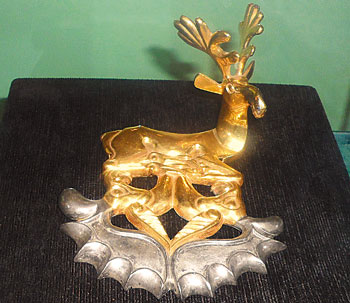 One of the museum items impresses with its beauty.

The Saka metallurgists could also carry out micro soldering: Today it can be done only with a magnifying glass and a special device. But 2,400 to 2,300 years ago, the Arimaspians didn’t use them, yet they still mastered the art of micro soldering to perfection.

In the ancient Altai culture, death was perceived as a continuation of life in another world. All man’s attributes denoting his rank were buried with him. The leader, as the embodiment of God on earth, retained his power even after death. Therefore, it was necessary to keep his body free of corruption.

The Arismaspians knew the secret of embalming, and their experience in the construction of masonry structures allowed them to construct seasonal permafrost lenses in the burial chambers of the mounds.

The ancient Sakas believed that a person comes into this world with a horse and goes out with it. Therefore, 13 chestnut horses were buried in Berel burial mound No. 11, signifying the high rank of the royal person who was laid to rest there.

The buried horses were saddled and bridled; the heads of some of them were dressed in masks, and given wooden horns in the style of mountain goats. The equestrian equipment of reins, breastplate, saddles, metal plates, cheek-pieces, pendants and belt separators were made of wood, decorated with carved ornaments and gold leaf and tin. Images of animals were placed on items of equestrian equipment, including feline predators, mountain goats and bighorn sheep, moose, birds of prey and fantastic creatures such as griffins, as well as floral motifs.

A novel discovery found in the Berel burial mounds figure is a winged horse in a horned mask. The image of a mountain goat confirmed the buried animal’s new heavenly status as the mountain goat is an inhabitant of heaven peaks in the mountains, a special sphere of space accessible only to the elite including the dead leader.

Mythical winged horses, or tulpars in Kazakh, are today a key heraldic element in the state emblem of Kazakhstan. Horns represent an image of heavenly grace, of fertility and military success. Thus, the winged horse with a horn of plenty is an important typological image that has deep semantic and historical roots.

The restored equipment of one buried horse is now on display at the Nazarbayev Center museum. Master-restorer Krym Altynbekov using patented technology was able to reproduce the beauty and majesty of the ancient king’s horse. The museum also displays an excavated royal sarcophagus carved from the single trunk of a centuries-old larch tree. The lid of the sarcophagus is decorated with four bronze sculptures of fantastic birds, eagles and griffins covered with gold.

Today, the famous Berel mound treasure is considered to be one of the priceless treasures of the world. These archaeological finds are unique examples of the brilliant art of the ancient peoples of Eurasia.

Today, the Berel State Historical and Cultural Museum stands beside the ancient mounds. The site is also close to national parks containing flora, fauna and scenery of world importance that are being protected by the project on biodiversity in the Kazakhstan part of the Altai Mountain Range by the United Nations Development Programme (UNDP), the Global Environment Facility (GEF) and the Program of the World Wildlife Fund (WWF).

These international bodies are all working closely with the government of Kazakhstan to uncover and restore the ancient culture of the region, construct open-air museums at excavated archaeological sites and create communications and residential infrastructure for visitors. In this way, the restored treasures and glories of the ancient Altai peoples will enrich the peoples of the world.