By Maral Zhantaikyzy in Culture on 10 December 2012

ASTANA – On November 15, the new Bekmambetov Cinema opened in the centre of Almaty. 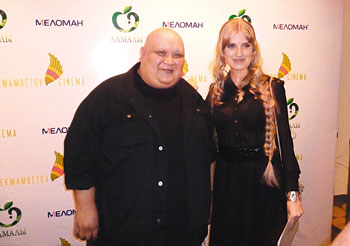 Farkhat Abdrakhimov was one of the first to visit the recently opened Bekmambetov Cinema.

The Bekmambetov Cinema was originally due to open in the summer, and although its VIP level has now opened, work has yet to be completed on its public theatres.

The movie theatre is named after world famous director Timur Bekmambetov, but he was unable to attend the opening as he was on the jury of the Seventh Rome Film Festival. However, well-known actors such as Venera Nigmatullina, Assel Sagatova, Aynur Niyazova and Farkhat Abdraimov attended the ceremony.

Trailers and excerpts were shown of two upcoming films, “Gentlemen of Fortune” starring Sergei Bezrukov and the animated feature “The Snow Queen.” Both films will appear before the New Year, and their premieres in Kazakhstan will be held in Bekmambetov Cinema.

“We are confident that the professionalism of Timur’s team will be reflected in his theatre,” Nariman Abiyev, a leading expert on film distribution, said.

According to the organizers, Bekmambetov Cinema will become a creative platform, a venue for filmmakers, actors, film fans and film critics.

The cinema is located in the Almaly shopping centre under the New Square in Almaty. It is equipped with the latest cutting-edge technology allowing every spectator to completely immerse themselves in the action.

The cinema has six screens. On the second floor, it has three standard screening theatres that have 139, 86 and 50 seats. On the lower level, it has two VIP theatres and one luxury VIP theatre with white leather chairs, bartenders and individual service where patrons can order light meals by call button.

A similar cinema will open soon in Astana.