By Anel Adilbayeva in Nation on 10 December 2012

ASTANA – The music of Kazakhstan’s band Magic of Nomads is a unique combination of various instruments and the incredible sounds of Kazakh folk culture mixed with a modern edge. Magic of Nomads is a symbiosis of ethnic and classical music and its band members have a strong desire to share the unique beauty of the music of the great steppes. The band consists of six accomplished professional musicians. 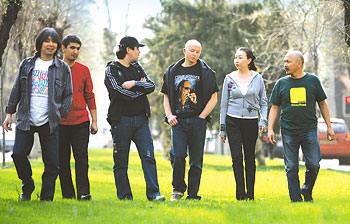 Magic of Nomads band consists of six accomplished professional musicians, performing in their compositions symbiosis of ethnic and classical music.

For the first time in the history of Kazakhstan, domestic musicians have released an album produced by one of the most iconic recording studios in Europe, London’s Abbey Road. This studio has been responsible for the release of music by legendary artists, such as Frank Sinatra, Paul McCartney, U2 and Glenn Miller.

“I was struck by their professionalism and I admire their style,” London record producer Sam Ouknell said of his work with Magic of Nomads.

Three thousand copies of the Nomads album produced by Abbey Road, “Bul Bul Zaman,” were released and the popularity of the album was immediately apparent, despite its high price of 6000 tenge ($40). The album includes seventeen songs in three languages, including English. The multiple languages are designed to appeal to the Western listener. This unique style of music performed by such accomplished artists has not been heard in Kazakhstan for a long time. Multi-instrumentalist and master of throat singing Edil Khussainov, kobyz performer Gaziza Gabdrakhimova, composer Rinat Gysin, dombra player Salimgerey Sadykov, leading jazz pianist Victor Khomenkov and arranger Yermek Diyarov are the talent that comprise Magic of Nomads.

The album didn’t include the popular Beatles sounds that Nomads has performed in the past using Kazakh folk instruments, such as the zhetygen, kobyz, shan-kobyz and dombra. However, the album has a variety of impressive compositions resulting from the efforts of producer, Sam Oukell, who worked on the soundtrack for “The Lord of the Rings” and “Harry Potter.”

“During recording, each of us was sitting in the cabin playing his or her own part,” says Gysin. “Of course, it was done to capture the pure sound of each instrument, which we could only dream about before. Perhaps, recording at Abbey Road for a musician means nothing less than a gold medal for the athlete.

The studio further honoured the group by allowing Nomads to place the logo of the London studio on the cover of the “Bul Bul Zaman” album, a privilege not granted to all those who record at the historic Abby Road. A special cover for the album complete with felt tumars (talismans) was designed by Kazakh artisans. Such details are meant to interest the broad international audience who will soon have the opportunity to buy the album.