By Yerlan Baimagambetov in Sports on 10 December 2012 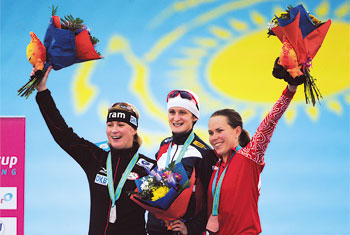 Stage three of the World Speed Skating Cup has come to an end in Astana. Day 2 of the competition started with a women’s 1500 metre contest. Yekaterina Aydova from Kazakhstan showed the best result in Division B coming sixth in the standings. Tatiana Sokirko finished in the eighth place while Yelena Urvantseva found herself at the bottom of the table. Athletes from Norway, Hegge Bokko and Marie Hemmer won the first two places as Kaylin Irvine from Canada gained third place.

Division A was dominated by Canadian Christine Nesbitt, who demonstrated the time of 1 minute 57.18 seconds. Second and third places are occupied by Marrit Leenstra and Linda de Vries from the Netherlands. The Kazakhstan team’s leader Dmitry Babenko showed the best result in his career and updated his record in the men’s competition with the time of 13 minutes 10.31 seconds. The event’s favorite Jorrit Bergsma of the Netherlands became the winner of the men’s 10,000 meters race. He also updated the venue’s record with the result of 12 minutes 50.40 seconds. His teammate Bob de Jong took second place being 0.82 seconds behind. Third place is taken by the previous record holder of the Alau Ice Palace, Seung-Hoon Lee of South Korea.

Canadian Christine Nesbitt won the 1,500-metre event and captured gold in the women’s team pursuit along with teammates Ivanie Blondin and Brittany Schussler at the Essent ISU World Cup in Astana, Kazakhstan on Sunday.

“I had a good opener and first lap, so the first 700 metres was decent. I was trying to feel smooth because I didn’t have a really good one last week,” said Nesbitt. “In the last two laps I was struggling to keep smooth. My last lap was painful but it was just enough to hold off a win. It’s a nice way to finish the 1,500 World Cups this fall.”