By Maral Zhantaikyzy in Culture on 10 December 2012

ASTANA – Kazakhstan’s movie-makers have come to America: From November 14 to November 18, the Kazakh film festival was held with great success in the U.S. capital Washington, DC, and in Boston. 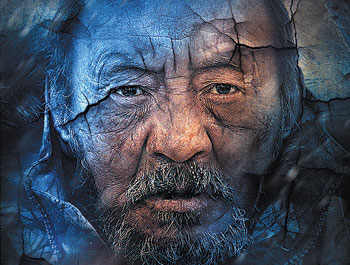 Shal, directed by Yermek Tursunov, transferred the intimate plot of Ernest Hemingway’s famous short novel “The Old Man and the Sea” onto the Kazakh steppe and proved a great success with the public.

Entitled “Flowers of the Steppe”, the festival included such movies as “A Gift to Stalin”, “Kelin” (Kazakh for The Daughter-in-Law), “Letters to an Angel”, “The Dash”, “Seker” and “Akkyz”.

Those completely different films portray the history of Kazakhstan in different eras. The festival created new cultural ties between Kazakhstan and the United States and gave Americans a unique opportunity to learn about life in the country located on the other side of the globe.

Hollywood producer Michael Fitzgerald discussed the Kazakh cinema in post-screening discussions. Fitzgerald praised the skill and talent of Kazakh movie makers and noted the rapid development of the nation’s film industry and its potential for future growth.

Another American producer Steven-Charles Jaffe, who also serves as Honorary Consul of Kazakhstan in Los Angeles, also praised the growing potential of the Kazakh cinema.

Filmmaking in Kazakhstan has come a long way since cinematic production began there in Soviet times. The year 2012 was very successful for the Kazakh film industry. In May, Zhauzhurek Myn Bala (“A Thousand Brave Warriors”) directed by Akan Satayev was launched in a national rental format and had great success. This historical epic made with a massive budget will be presented as a potential Oscar nominee.

This autumn is seeing a wave of classics produced by Kazakh film-makers. Shal (“The Old Man”), directed by Yermek Tursunov, transfers the intimate plot of Ernest Hemingway’s famous short novel “The Old Man and the Sea” onto the Kazakh steppe and proved a great success with the public.

These recent popular and critical triumphs show that the Kazakh film industry has been developed on a strong basis and that it has achieved international standards in cinematography and the ability to produce high-quality movies.

The first Kazakh film studio was established in 1934 and in 1936, it released its first documentary. The first feature film, “Amangeldy” was made at the Leningrad Studio in 1938. It tells the story of Amangeldy Imanov, the leader of a popular revolt in 1916 against the Tsarist Empire and then a prominent figure in the struggle to establish Soviet power in Kazakhstan.

During World War II, the two main Soviet film studios Mosfilm and Lenfilm were temporarily evacuated to Almaty, which was then called Alma-Ata. They turned the city into a film-making centre. For the rest of the war, 80 percent of all Soviet films were shot there. The most famous Soviet directors and actors met in wide studio corridors called Grand Boulevards. Sergei Eisenstein’s famous epic movie “Ivan the Terrible” was made there.

In 1960, the great studio in Alma-Ata was renamed Kazakhfilm and Shacken Aimanov became its head. It was the true dawn of the Kazakh cinema. The studio’s production capacity expanded to eight full-length feature films and 50 documentaries per year and many of them were of high quality. Such films as “Kyz Zhibek”, “Our Dear Doctor”, “My Name is Kozha”, “Trans-Siberian Express” remained beloved by modern audiences today and are included in the Golden Collection of Kazakhfilm. They continue to be shown at film festivals around the world, alongside modern movies.

Kazakhstan’s film-makers also produced outstanding movies during the turbulent times of perestroika, during the 1980s. “The Needle” starring the legendary rock singer Victor Tsoi has become a signature film for Kazakhstan and all of Soviet cinema from that period.

“The Touch” directed by Amanzhol Aytuarov won the People’s Choice Award at the Three Continents International Film Festival in Nantes in 1990. “Wolf Cub among People” won the Lucas award main prize at the Frankfurt-am-Main film festival in 1989. The premiere of “The Little Fish in Love” directed by Abai Karpykov took place in New York. The films of the perestroika period reflected the realities of that time. They were free of the pomposity and cloying sentimentality that filled most films of the Soviet era.

The Kazakh New Wave flourished in the middle and end of the 1990s. The movie “Cardiogram” directed by Darezhan Omirbayev was a box office success for two months in France, “The Life History of a Young Accordionist” directed by Satybaldy Narymbetov won six prizes.

The emergence of the Kazakh cinema in the international arena has spurred international collaborative projects. Since 1999, the New Look Youth Film Festival has been organized with the support of the Soros Foundation-Kazakhstan. Every year, a Kazakh Film Festival called Kazakhstan: Montage of Cinemas is held in the United States.

Since independence, the Shacken Aimanov KazakhFilm company has paid close attention to producing films on historical themes. Movies such as “The Fall of Otrar”, “Abai”, “Nomads” and “A Thousand Brave Warriors” remain great examples of this genre.

Director Yermek Tursunov has made such acclaimed works as “The Daughter-in-Law”, “Shal” and “The Young One” and Rustem Abdrashev won acclaim for his “A Gift to Stalin” and “The Sky of My Childhood”. Tursunov now enjoys high standing among the world’s moviemakers and his work is regularly shown at international film festivals.

As Tursunov says, after its long growth period through the Soviet era, the Kazakh film industry has become “an object of national pride”.