By Bektur Kadyrov in Culture on 10 December 2012

ASTANA – On November 20, the Camerata Tempo First International Festival of Contemporary Composers of the Commonwealth of Independent States and Turkic countries opened here in the Kulyash Baisseitova National Theatre of Opera and Ballet. 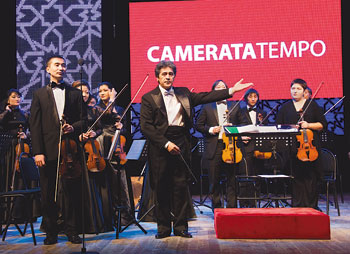 Guests of the festival received a chance to get acquinted with the works of great musicians.

Opening the festival, Deputy Culture and Information Minister Askar Buribayev congratulated the participants on the project and wished them success.

The festival also celebrated the designation of Astana as the cultural capital of the CIS and the Turkic world in 2012. The main celebrations and concerts took place in Almaty on November 24, 25 and 28 at the Zhambul Kazakh State Philharmonic Hall and will end on December 8 at the Abai State Academic Theater of Opera and Ballet in Almaty.

Three of the five concerts included pieces by contemporary composers. Another presented a recital by Gia Kancheli and the gala concert will include masterpieces by Mozart, Franz Lehar, Dmitri Shostakovich, Astor Piazzolla, and Alfred Schnittke.

Camerata Tempo performs works by little-known composers, some of whom worked in isolation and others who died without ever having had their pieces performed in public. The festival aims to fill this gap and present the works of serious contemporary composers, especially from Kazakhstan and the other nations of Central Asia.