By Natalia Kurpyakova in Astana on 10 December 2012

ASTANA –The gala concert “Halkynyn Uly Perzenty” (Kazakh for “great son of the nation”) dedicated to the Day of the First President of the Republic of Kazakhstan was held recently in Astana. 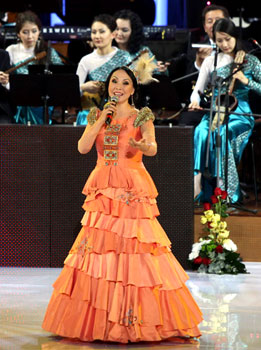 It is well known that music occupies a special place in the life of President Nursultan Nazarbayev,and during the public holiday all of the songs were performed in honor of the head of state.

Artists from Russia,Belarus, Ukraine,Uzbekistan, Moldova, Armenia and Kyrgyzstan came to congratulate the people of Kazakhstan on the new holiday. They performed songs in Kazakh and in their native languages, recognising that members of more than 100 nationalities live in Kazakhstan under a single shanyrak (Kazakh for “roof of the yurt”).

“People in our country love and respect the President of Kazakhstan. It is a great honour for me to be with you today,” Aleksei Matias said.

“I am delighted with your president. Only confidence, strength, and hope could have built such a beautiful city as Astana,” Karine Asiryan from Armenia said. She delighted the audience with the Kazakh folk song “Bir Bala.”

The performances of the artists were accompanied by the video “The Chronicles,” depicting the recent past of independent Kazakhstan, and a biography of Nazarbayev.

The concert culminated with songs whose lyrics were written by Nazarbayev, including “Ush Konyr”, “Saryarka” and“My Town.”

The concert concluded with the song “Ak-ordam – Astanam” performed by People’s Artist of Kazakhstan Roza Rymbayeva, during which the concert’s participants gathered together on stage. Spectators, sharing their impressions after the concert, noted that the Day of the First President is a new, but much needed, holiday. Many said this day will be one more holiday of unity for Kazakhstan’s people who live in peace and harmony.