By Assem Kazybay in Culture on 10 December 2012

ASTANA – Kazakhstan is known internationally due in greater part to the global initiatives of President Nursultan Nazarbayev, especially in the area of inter-ethnic dialogue, politicians and experts said at a November 29 forum held at the university here that bears the president’s name. 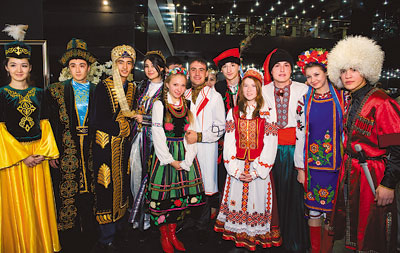 The “Kazakhstan Way” of development is an integral part of statehood, while tolerance and responsibility have a deep meaning in a country of more than 100 ethnic groups living together in peace.

The principle of respect for the rights and interests of ethnic communities and the integration of multi-ethnic society were among the most important foundations of strengthening the independence of this country, the experts noted. Today the “Kazakhstan Way” of development is an integral part of statehood and the country’s model of inter-ethnic tolerance and interfaith harmony is recognized around the world. Tolerance and responsibility have a deep meaning in a country of more than 100 ethnic groups living together in peace.

Kazakhstan’s tolerance has made possible the mobilization of the many-sided multiethnic potential of the state to strengthen its independence and statehood, equality of opportunities and the protection of the rights and freedoms of all citizens.

Participants in the International Forum, New Kazakhstan in a New World, held on November 29 in Astana, also discussed the issues of inter-ethnic and inter-faith relations and related social issues.

Participants in this discussion included experts from Kazakhstan, neighbouring countries and the wider world. They all agreed that countries suffering from inter-ethnic and inter-religious conflicts had something to learn from the Kazakhstan experience.

The Kazakhstan model of maintaining interethnic and interreligious stability is the result of much work and cooperation by state bodies and civil society institutions. Since independence, the country has created a legal shield against the stirring up of racial, ethnic and religious hatred. More than 100 ethnic groups express their spiritual faiths in dozens of religious organizations openly and freely.

Elmira Akhundova, a writer and journalist, and member of the Parliament (Majlis) of Azerbaijan said President Nazarbayev’s role was crucial in creating a stable and prosperous state based in domestic peace, security and mutual tolerance.

“There is little doubt that the place which the state (of Kazakhstan) occupies in the world became possible thanks to the role played by President Nazarbayev as he navigated his country through the muddy waters of post-Soviet conflicts in Central Asia,” she said. “President Nazarbayev kept the peace on inter-ethnic grounds and deftly maneuvered between the pitfalls of the ‘Great Game’ conducted by the superpowers in Central Asia.”

David Istvan Shomfai, a researcher at the Ethnography Institute of the Academy of Sciences, agreed with this assessment.

“President Nazarbayev has approached inter-faith issues very wisely and objectively,” he said. “The president showed wisdom in supporting all the traditional religions in his country. Now Kazakhstan is providing stability not only within its own borders, but also through drawing representatives of religious faiths all over the world into a global constructive dialogue.”

One outcome of Kazakhstan’s policy of peace and tolerance has been the holding of the tri-annual Congress of Leaders of World and Traditional Religions. This Congress is an initiative of President Nazarbayev that has become a representative international forum, uniting spiritual leaders from all corners of the globe to relieve tensions between religions and between civilizations. The first four of these congresses were held in Astana in 2003, 2006, 2009 and 2012, and they have become one of the largest international regular international gatherings in the history of independent Kazakhstan.

As the President constantly stresses in his public speeches, without stability there can be neither effective development of the economy nor a balanced social policy aimed at improving the welfare of citizens.

In January 2012, he outlined a new strategy to further strengthen the economy and improve national welfare and social stability in his annual address to the nation. The address launched a new series of policies to accelerate the modernization process in the social sphere. As the president has said, it is vital for Kazakhstan to find the optimal balance between economic progress and the provision of public goods.

“First is the principle of evolution. There should be no ‘flash-forward’,” Nazarbayev wrote. In other words, all changes in the social sphere should correspond to the level of development of the country’s economy and opportunities.”

“Second is the principle of shared responsibility. Not only the state and all the levels of government and private organizations, but the whole society should share the responsibility for the course and the results of social modernization,” the president wrote.

President Nazarbayev believes it is very important for the success of modernization that every citizen has been helpful to their country. Modernization is necessary for all citizens of the nation. Therefore, public consensus and success can be achieved only with this understanding.

“Third is the principle of partnership participation. All work should be based on close interaction between government, business and citizens. The task of government is to ensure a rational balance between the interests of the state, society and the individual. That is the true fairness,” the president wrote.

Nazarbayev maintained it was also important to actively develop a social partnership, to create conditions for increasing the participation of the private sector in modernization, especially in the social sphere.

“Fourthly, the principle of incentive: The state creates conditions for the people of Kazakhstan to be able to improve their own quality of life. State social support is directed at recipients to encourage them to work, create and engage in social activity,” the president wrote.

“Fifth is the principle of professionalism. All decisions must be thoroughly analysed and take into account the scientific-designed feasibility study on the basis of world experience.”

“Social modernization is not for ‘general government’, it should serve for the benefit of each citizen,” the president wrote.

The aim of the new social modernization programme is to find an optimal balance between accelerated economic development pushed by the state and the provision of social benefits. It also seeks to establish social relations on the principles of law and justice.

To achieve these ends, the president has defined goals for government bodies to be fulfilled in the spheres of education, healthcare, youth policy, culture, mass media, affordable housing, sport, employment, social security and the pension system.