By Altai Taizhanov in People on 10 December 2012

The name of Beket-ata, spiritual enlightener and humanist of the 18th century, shines brightly in the halo of saints of the Mangistau land. Next year will mark the two hundredth anniversary of his death. 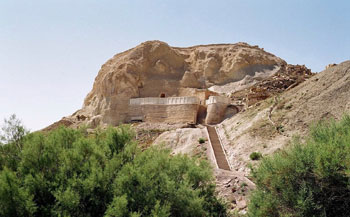 Beket-ata has built four mosques, and after death was buried in the mosque carved out of the cretaceous rock of the Oglandy Mountains.

Born in 1750, Beket-ata lived until 1813 and was one of the greatest religious teachers, scientists and philosophers in the history of Central Asia. He was a great spiritual teacher of Sufism who became a famous figure throughout the Turkic world. He had enormous social influence and raised the souls of an entire generation. The mosques he built became popular havens where thousands of people sought and found spiritual peace and prayerful protection.

The sick, the suffering and the weak came to him for healing. He was a fair judge in complex and controversial disputes. His life was an example of selfless service to God and people. He was also remembered as a brave soldier and a wise mystic who knew and taught many secrets and spiritual laws of life.

Beket-ata was a highly educated man who knew the laws of physics, mathematics and astronomy. Born in 1750 near the village of Kulsary in the Atyrau region, at the age of 14 he went to Khiva, which was the capital of the Khiva Khanate (now a town in Chorezm Province in Uzbekistan) to learn science. After returning home, he built four mosques in the Mangistau lands, three of which are underground. Under the Oglandy mosque, which is cut into rock, he founded a theological school, which also became a research center and observatory. There, he made an enormous contribution to the development of science in his native land.

In 1790, at the age of 40, Beket-ata became a follower of Sufism, one of the major branches of Islam and one that was then gaining ground across Central Asia.

He radiated hope to those around him wherever he traveled. People came to him with various requests, from health to resolving quarrels and disputes. He always showed wisdom, patience and tolerance towards human weaknesses. He was able to cure people and bring disputes to peaceful agreements in a remarkable manner. In his sermons, Beket-ata always admonished believers to be fair and to live in truth.

He was revered as a holy man and admired for his heroic strength and courage. These qualities helped him win victories in battles with his enemies and to construct the mosques he built in the Mangistau territories. First, the Ak-mosque was built in his birthplace Kulsary. Then he built a second one cut out of the chalk cliffs near the village of Beineu.

The third mosque was built in the Bayshatyr lands on the Ustyurt plateau. Finally, the fourth underground mosque, consisting of seven rooms with excellent acoustics, was carved out of the cretaceous rock of the Oglandy Mountains. There the holy man was buried. Today, the grave of Beket-ata is a spiritual, historical and architectural monument.

The human worldview has passed three stages in its development: mythological, religious and philosophical. All spiritual values emerged earlier and last longer than material things. Therefore, the mythologizing of such great individuals as Beket-ata in our modern age expresses the dialectical principle of the reawakening and renewal of the mythological consciousness through religious perception. The legends surrounding Beket-ata should be considered from this viewpoint.

The modern human mental outlook goes back to its separation from nature and the individual’s desire to know his or her spiritual qualities. This explains why truly great spiritual leaders attract myths and legends around their lives. Therefore, all the legends about such individuals are constantly amended and renewed. Only in recent years have we begun to realize that these myths contain profound spiritual truths.

Judging by the legends that have come down to us, the holiness of Beket-ata was truly authentic. As a grown man, he was blessed by respectable and holy men, especially by his relative Tama Eset Batyr, who became famous as a brave defender of the steppe peoples. Beket-ata learned to read from his grandfather and his local mullah. Then in Khiva, he studied the Hadith and other religious books of the Islamic faith.

Beket-ata was thoroughly versed in Shariah, Islamic religious law and he led religious services. His sharp wit and shrewdness, and his fairness, care and compassion for the needy won him the deep reverence and love of the people. At the age of 40, he was blessed by his spiritual mentor Bakirzhan Khodja, and from that time he was called Beket pіr – spiritual guide, or pastor in Kazakh. He died at the age of 63 and left a rich heritage of sermons and moral teachings that remain relevant today.

Studying the life of such a righteous man as Beket-ata lifts our spirits, deeply encourages us and elevates our conception of the world around us. His teachings help us to better understand ourselves, regardless of our nationality, race or faith. This is especially important today, when our major challenges include maintaining peace and spiritual harmony in society and learning to appreciate the spiritual treasures of other religions, cultures and peoples around the single world we share.

The author is a professor at M. Ospanov West Kazakhstan Medical University in Aktobe.