ASTANA – Kazakhstan’s Astana Arlans won a sweeping 5-0 victory against the USA Knockouts at Daulet Sports Complex in Astana on November 23 in the World Series of Boxing (WSB). 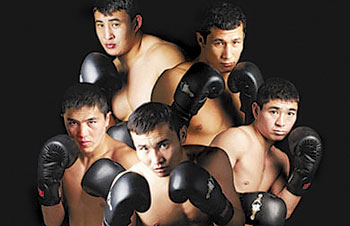 The Arlans have 32 boxers from nine countries making them an international squad with worldwide appeal.

Previously, the Arlans beat the Ukraine Otamans 3-2 in their first away series of fights of the season in the Acco International Exhibition Centre in Kiev on November 17.

The World Series of Boxing (WSB) is the world’s main team boxing competition in which 12 franchises from all over the globe compete for the world title.

The Knockouts were looking for their first victory after being defeated by Britain.

The Arlans only had to fight in four weight divisions because during weigh-in, a U.S. fighter in the 73-kilogram (160 pound) division registered overweight. So Kazakhstan’s Miras Bairkhanov won a victory without a fight.

Kazakhstan’s Bagdad Alimbekov, Samat Bashenov, Hrvoje Sep and Ruslan Myrsatayev were in good shape on the night and backed by a fervent crowd delivered resounding victories.

“All the boxers on our team were willing to take part and fight hard and delight fans, especially because they fought at home. There were a lot of positive emotions. I think public support was also vital, so we had to delight our boxing fans,” said Arlans Head Coach Sergey Korchinskiy.

“Of course, our goal is to win the World Series of Boxing season. I have come here to make this happen. I admit that the team’s management just won’t accept any other result,” Korchinskiy said.

In the third tour of the World Boxing Series, Astana Arlans Kazakhstan will host the British Lionhearts at the Almaty Sports Palace on Friday, December 7.

The Kazakhstan Boxing Federation (KBF), the sport’s national governing body, owns the Arlans. The team is named after the alpha male wolf – the leader of the pack – an animal that has been admired and respected for centuries by the nomads of the Great Steppe for its intelligence, strength and courage.

A dedicated staff under General Director Bolat Mankenov manages the team, with head coach Korchinskiy overseeing the sporting side. The Arlans have 32 boxers from nine countries making them an international squad with worldwide appeal. After such a stunning triumph against the Knockouts, prospects for 2013 look bright.