By Vladimir Kuryatov in Astana on 10 December 2012 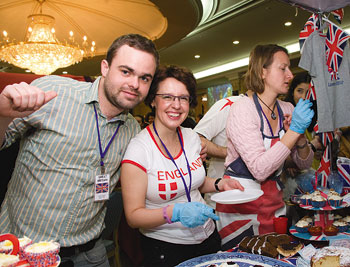 It is customary for diplomatic missions accredited in a country to organize a Christmas Charity Fair, bringing together diplomats, businessmen, and locals.

Guests of the event enjoyed lotteries with valuable prizes and souvenirs made by representatives of embassies and international organizations. Goods were also offered for sale by fair participants from around the world. Visitors to the fair were able to buy unique items at low prices and taste international cuisines prepared by the wives of ambassadors and embassies’ staff.

The charity fair was established in 2008 to be a bright festive event for visitors and residents of the capital. This year’s charity fair was attended by representatives of the Czech Republic, Slovakia, South Africa, Italy, Brazil, the United States, Germany, the UK, Japan, India, Austria, Russia, Ukraine, Spain and other countries of the European Union. Norway, Sweden and Finland organized a joint stand and provided the highlight and the very special guest of the event, Santa Klaus from no other place but Laplandia.

It is customary for diplomatic missions accredited in a country to hold this type of event. Proceeds from the Astana event usually go to orphanages and other civic organizations.“Money was collected for charity purposes for orphanages in Kazakhstan. It was harder in the past because there was no contact with orphanages. Now we communicate well with the Ministry of Education and the Ministry of Labour and Social Security, and we have the entire list of orphanages in Kazakhstan and communicate with the society of disabled children. During the first year we collected less than three million tenge, last year it was nearly six million,” said Mrs. Kopecký, wife of the Ambassador of Czech Republic to Kazakhstan.

She noted that many private companies donate money and gifts for children and some businessmen have expressed their desire to participate.

Events organized by the representatives of missions significantly contribute to the development of relations between nations.