Ambassadors Club is New ‘Must’ Venue for Movers and Shakers

ASTANA – Established in 2009, the Ambassadors Club, a small, elite group of people, is planning to take on a new form to accommodate the rising interests of Kazakhstan. 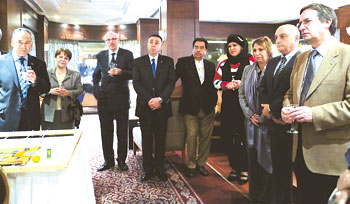 The Ambassadors’ Club is Kazakhstan’s only diplomacy, business and cultural club.

The club offers its members a special opportunity to establish communication channels and experience Astana’s spirit of hospitality rooted in the heroic nomadic traditions of the Eurasian steppe.

The Ambassadors’ Club is Kazakhstan’s only diplomacy, business and cultural club. Based in the Ramada Plaza Hotel, it provides a venue for personal contacts between diplomats, business people, journalists and cultural creators in the Kazakh capital. In 2013, the club is launching an ambitious new programme of business and leisure tours outside the capital for its members.

The club is planning its 2013 programmes in close cooperation with major embassies and government institutions in the capital and is utilizing the skills and talents of the city’s creative community. It is the first institution of its kind in the capital where the leading representatives of major nations play an active role in setting the agenda.

The club was launched by the Kulanshi Art Center, which continues to play an important role, and it enjoys the close support of the Ramada Plaza Hotel and the Kazakhstan National University of the Arts.

Astana has become Central Asia’s major location for holding exhibitions, expositions, cultural festivals, official receptions and international conferences. Members of the club are, therefore, uniquely situated to enjoy privileged access to the most important business developments in the largest and fastest growing economy and major energy power at the heart of Eurasia.

Every month, the club’s secretariat organizes a high-powered reception. The club provides the diplomatic corps with a window on the political, economic and industrial dynamics of Kazakhstan.

The club’s organized monthly meetings and briefings focus on topical themes of national importance including developments in the fields of education, energy, science, technology and the arts. The guest list of monthly meetings will be limited to professionals in the fields being discussed who are approved by the club’s secretariat. An official registration sheet will be uploaded on to the club’s Facebook page in January 2013.

The club will enter the New Year with a new, expanded and upgraded staff and new services for its participating members.

Inquiries could be sent to [email protected]