ASTANA, November 12 – Since mid-October, scientists and researchers from the University of Bologna in Italy have been working on a project in the Akzhayik National Park of the Atyrau region to preserve its unique biodiversity and develop eco-tourism in the Caspian region. 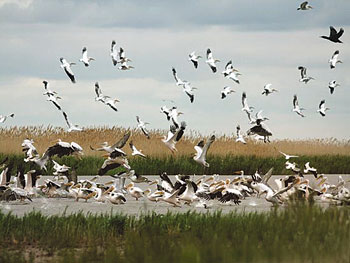 Shallow lakes of Akzayik are very attractive for the local fauna

The Akzhayik Nature Reserve is located in the delta of the Ural River on the coast of the Caspian Sea and covers a huge area of 111,500 hectares (11,948,000 acres). It has hundreds of shallow lakes surrounded by high reeds, reed mace and shrubs.

The national park opened on Feb. 6, 2009. Its territory is in the path of the East-Siberian-African flyway of migrating birds every spring and autumn. The nature reserve contains nesting grounds for river and diving ducks, gray geese and swans. Rare and endangered species of birds breed in safety in coastal and water ecosystems there, including pink and curly pelicans, yellow and small egrets, spoonbills, glossy ibis and sultans. Thousands of flamingos and pelicans rest there during their migration seasons.

The delta of the Ural River and its marine areas are also inhabited by Caspian seals and such rare, endangered fish species as the Caspian lamprey, Volga herring, sturgeon and salmon.

In 2009, the Ural Delta reserve was included in the list of important natural zones around the world that are protected by the Ramsar Convention. Kazakhstan signed this international treaty in May 2007, committing itself to preserve important bodies of water within its territory. The Tengiz-Korgalzhyn lake system is also included on the Ramsar list.

The inclusion of the Akzhayik Reserve in the UNESCO biosphere reserves list was supported by the work of the scientists of the University of Bologna in creating their proposed new Ural Delta Park over the past year.

The University of Bologna is also organizing the production of a documentary film about the reserve. And it is organizing photo exhibitions in Astana, Atyrau and Astrakhan on the theme of the biodiversity of the Akzhayik wetland reserves.

Alexander Ivashenko, head of research for the Akzhayik Nature Reserve said that when executives from Italian travel companies toured the region in September 2011, they noted an abandoned building where they proposed building a visitor centre at their own expense.

In the north of Italy, the Po River Delta Park is a river-shaped protected area that is one of the most important wetland zones in the Mediterranean and Europe for its landscape, outstanding flora and fauna habitats and extraordinary biodiversity. The Ural River Delta’s biological characteristics are very similar to those of the Po River. The similar eco-friendly atmosphere creates ideal conditions for different species of fish and waterfowl.

The Po River Delta Park is open to everyone and has already become a favourite vacation attraction in northern Italy. The scientists of the University of Bologna believe the Ural River Delta region has a comparable potential. The Ural Delta project is sponsored by Italy’s Eni oil corporation, which is a member of the international consortium developing the Kashagan super oil field in the Caspian Sea.

The Ural Delta development will include the active participation of local communities in the development of eco-tourism, crafts and education programmes.

The project will be supported by UNESCO’s Man and Biosphere programme which considers nature reserves around the world as areas where sustainable development can be achieved through a compromise between local communities and society. This balance will preserve the natural treasures of the Akzhayik Reserve and maintain its benefits for local communities.

The project has already been partially implemented by employees of the nature reserve in terms of scientific research and monitoring. The next stage will be completing ecology-friendly routes and tracks through the reserve and creating the primary infrastructure to serve it.

State Nature Reserve director Akzhayik Yelemes Rakhmetov said many tourism river routes, walks, roads, and equestrian riding trails were already completed and were ready for domestic tourists and foreign visitors. In October, the National Park sponsored a day with guided tours for visitors on some of its new eco-paths.

The plans to develop the reserve in conjunction with UNESCO will also open up new economic opportunities for the inhabitants of neighboring villages. They will be able to start businesses of their own, open guest houses and mini-hotels and revive national handicrafts.

Italian tour operators are interested in the prospects of eco-tourism in the Atyrau region. In May 2013, a delegation of tour operators is scheduled to visit the region with a view of constructing its ecotourism infrastructure. Prospects appear bright for thousands of foreign visitors to tour the region while its animals and plant life are fully protected.