ASTANA – Kazakhstan celebrates a century since the birth of Azilkhan Nurshaikhov, a Kazakh writer and journalist on Dec. 15. His writing had a rare depth of vision and attentiveness to the characters around him, probably derived from his experience as a WWII frontline soldier. 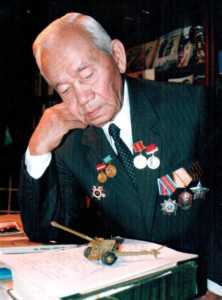 Nurshaikhov is best known for the novel “Years of Joy and Love,” a moving and intimate portrait of the lives of young students, which became an instant classic when published in 1970.

He has also devoted millions of words more – in short stories, essays, sketches, and novels – to describe with depth and precision the very essence of war and the post-war period.

Nurshaikhov was born in the Kelinsuegi village in the East Kazakhstan Region. He was 19 when WWII broke out. Like nearly all Kazakh young men of that age, he joined the Red Army. His father, Nuarshaikh Amangeldin was drafted into the army in the same year and died in 1943. Nurshaikhov went through the whole war as a commander of a gun in the 100th Kazakh Rifle Brigade, fought on the Kalinin, second Baltic, first and second Belorussian fronts.

At the front, he met his wife, Khalima, who served there as a nurse and a letter carrier. They married in 1946 and soon moved to Almaty, where they both entered the philology faculty at different universities. 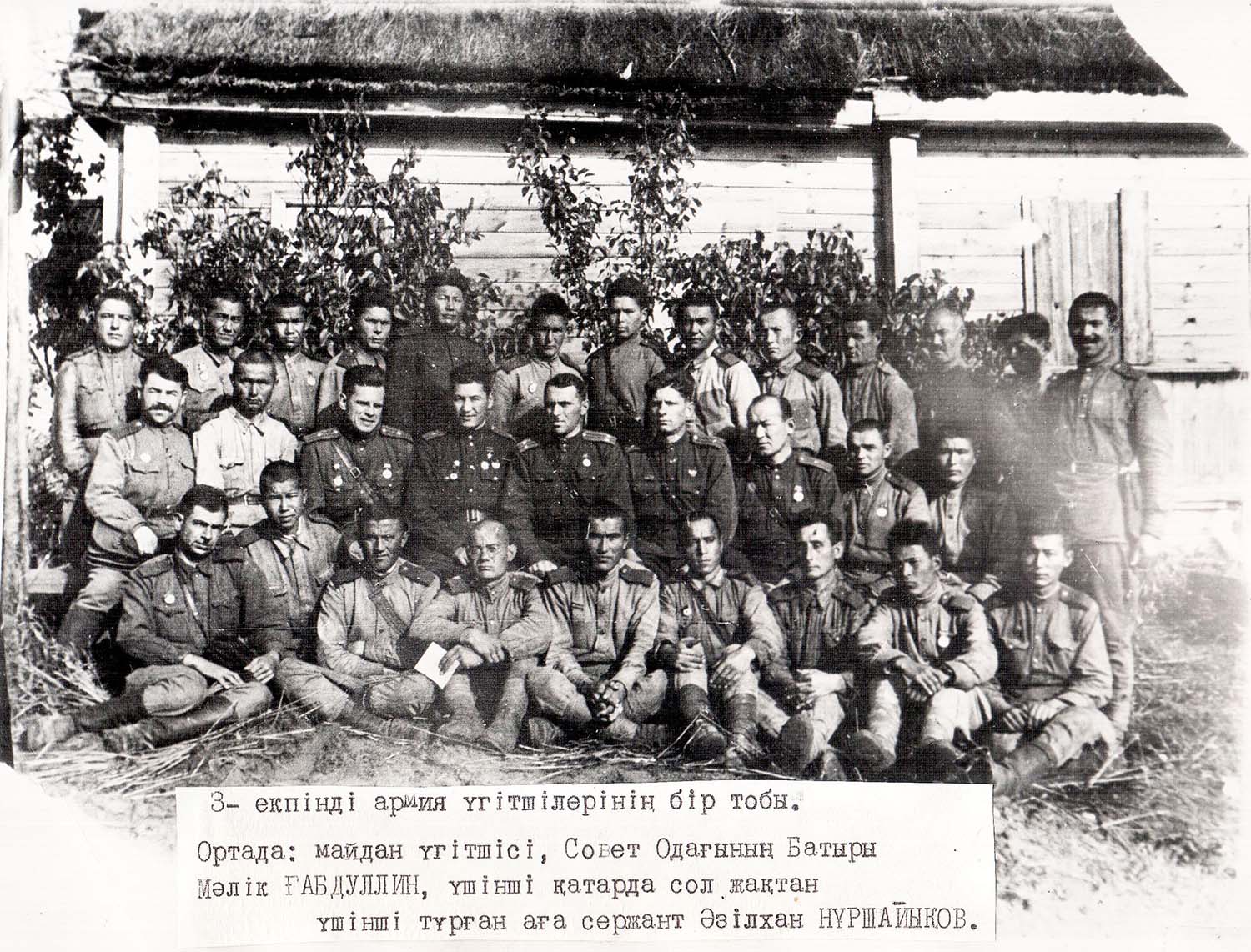 A rare photo of Azilkhan Nurshaikhov among his fellow soldiers (third row, third from the left). Photo credit: nurshaikhov.kz

At university, Nurshaikhov had a chance to listen to the lectures of prominent Kazakh writers, such as Mukhtar Auezov and Sabit Mukanov. Nurshaikhov once told a story that he used to carry two books – Kazakh poet Abai’s poems and the first part of Auezov’s “The Path of Abai,” in his duffel bag during the war. As a student, Nurshaikhov shared that with Auezov and received the classic writer’s astonishment and compliments.

His endless admiration for Auezov continued later in his life as he included Auezov’s image as a prototype for professor Mukhit Auenov’s character in his most famous novel “Years of Joy and Love.” 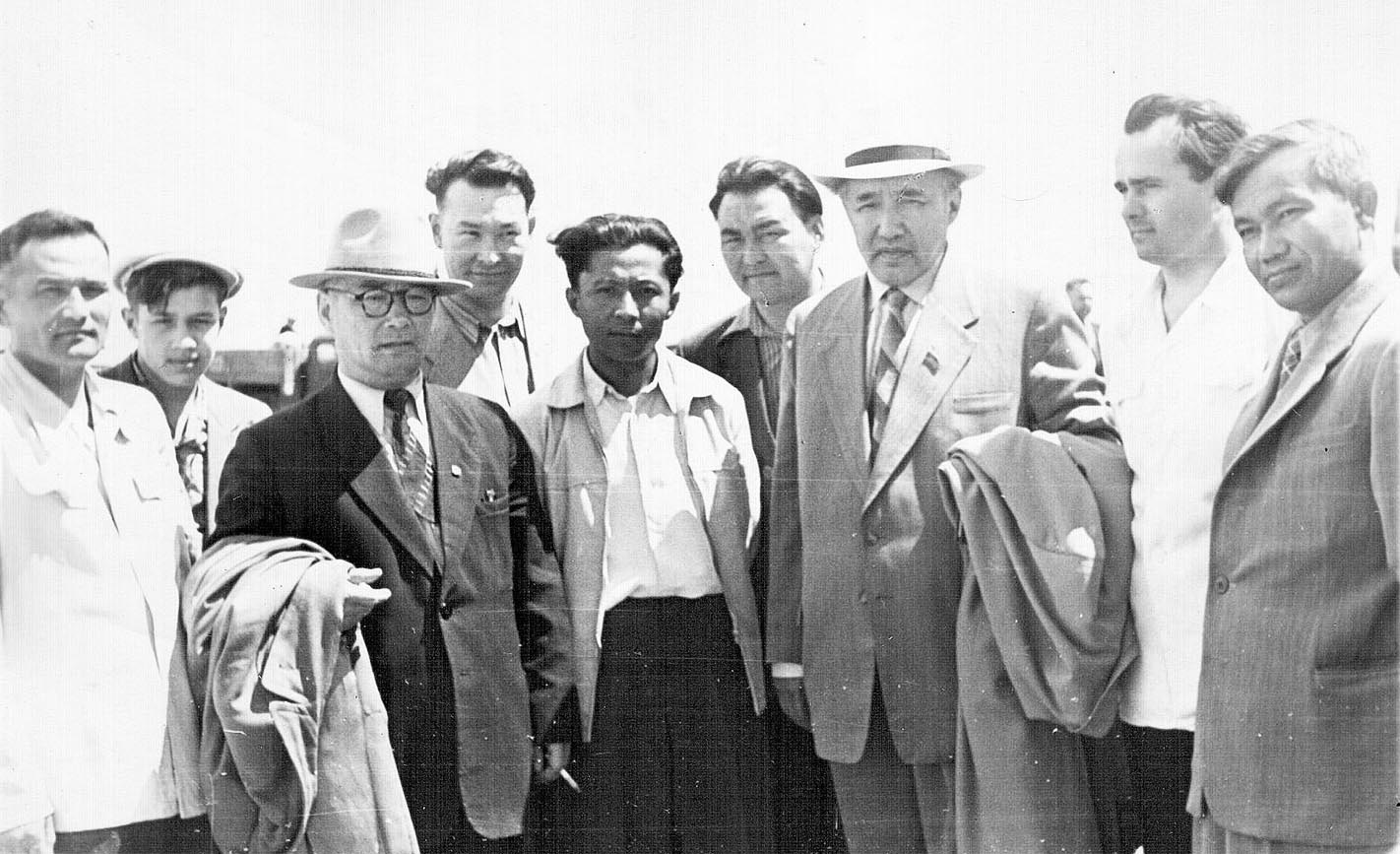 The interesting feature of the novel is that many characters were based upon real people, including the main character – journalist Yerbol Yesenov who is based on Nurshaikhov himself.

The author attempted to implement morality and universal human values through the central characters of the novel. The protagonist Yerbol fought heroically in the Great Patriotic War and on his return to peacetime at university he finds himself immersed in a romantic side of life. He falls in love with the beautiful Mentai. The young man learns to be faithful to friends, not to despair, and go towards his happiness remaining a real human being.

The book was published with 52,400 copies and was quickly sold out. The readers flooded the Zhazushy (Writer) publishing house with letters requesting them to republish it, which was done in 1972 with 60,000 more copies. In 1973, “Years of Joy and Love” was translated into Russian, and a new edition of 100,000 copies followed.

In parallel with his fruitful writing activity, Nurshaikhov was constantly engaged in journalism.

From 1953 to 1956, he served as the editor of the Pavlodar regional Kyzyl Tu newspaper, and during 1963-1965 as the editor-in-chief of Kazakh Adebieti (Kazakh Literature) national newspaper. 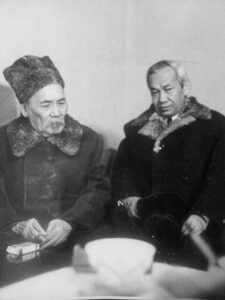 Another novel “The Truth and the Legend” published in 1976, made his name in a new genre – that of a novel-dialogue and it is still widely regarded as his best novel on the theme of war despite more than 40 other works. His main character is a prominent Kazakh Hero of the Soviet Union Bauyrzhan Momyshuly. Through a dialogue between the protagonist and the author, Nurshaikhov portrayed the life of the Kazakh hero in the great battles of WWII.

Life as a soldier has given Nurshaikhov a rare depth of vision. He used his original memories to bring out the physical and mental aspects of warfare, including bloodlust, fear, comradeship, heroism, and courage.

“The Truth and the Legend” is not only about the war. It also depicted the peaceful life of the country before and after the Great Patriotic War. The author introduced the reader to a number of social problems and all aspects of public life.

When asked how he gathers sources and materials for his new works, Nurshaikhov replied: “I get sources and material only from life. I base all my work only on what has happened. I do not write fiction. After all, life itself is a novel. You just need to be more discerning about the help you give to others. It is better to pay attention to the mysteries of society and time, and to study them.”

Nurshaikhov passed away in 2011. He was awarded the People’s Writer of Kazakhstan and many other national and international awards for his long career as a writer.